Why does my Dachshund keep licking? | Dachshund licking, what to do about it 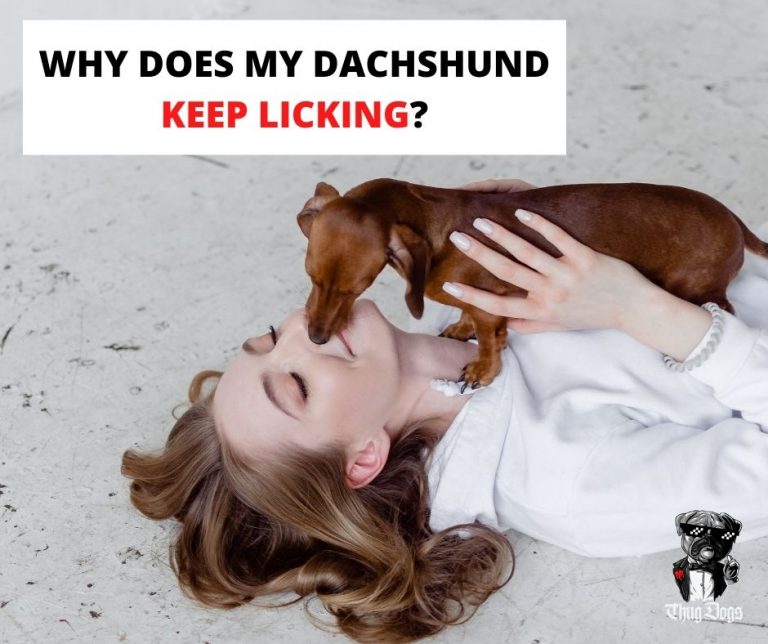 Why does my Dachshund keep licking? | Dachshund licking, what to do about it

Every Doxie owner will know that Dachshunds licking (themselves) is a never ending story. Whether it’s licking your hands, your face, their own paws, or objects around the house, Dachshund licking is usually not a problem.

However, a constantly licking dog can be annoying, and sometimes it’s a sign of a bigger issue. In this case, you may want to know: “why is my Dachshund licking?” and “What can I do to stop my Dachshund from licking so much?”

Why does my Dachshund lick so much?

Part of why Dachshunds lick so much is because of their history. A Dachshund is descended from the old Teckel earth dogs and is very scent orientated. This is one reason your Dachshund may lick as an open mouth is a way of drawing in more scent and information about the world around them.

The second reason is that Dachshunds are companion dogs. Bonding with their owners releases powerful hormones and neurotransmitters such as oxytocin. Cuddling and licking is not only a powerful way of showing love and submissiveness to a dominant member of their pack (you), but it’s also a great way for them to feel good, just like mothers holding a newborn baby.

Behavioural problem or a medical one?

And this is where the licking may become a behavioural problem. A Dachshund that is anxious or stressed may find that the act of licking can help them self soothe. In this case, they may start licking their own paws obsessively or licking your hands for ages without stopping.

The licking replicates the mother/puppy bond. It can become a bit of an emotional crutch for a stressed or anxious Doxie.

Another reason for licking is often medical. Doxies may lick objects when they feel nauseous. You’ll know this is the reason if they refuse to eat, are restless, and possibly drooling.

They may also lick any part of their body where they are experiencing pain or discomfort. So they may lick an itchy hot spot or one of their paws if there is an ingrown hair or fungal infection.

If your Dachshund’s licking is excessive, it’s essential to identify whether it’s a behavioural problem or a medical one. A vet can help you make the call so that you know what steps to take next.

Why is my Dachshund licking its paws?

Obsessive paw licking is a common problem among Dachshunds. This is especially the case for Doxies with dilute colors such as cream that may be more prone to skin problems.

Paws are susceptible to infections

Several issues can cause excessive paw licking. The first is a medical problem. The toes are the perfect spot for a thorn or foreign object to be lodged. They can also be prone to fungal or bacterial infections. There may be mites, abscesses, ingrown hairs, or overgrown nails that are causing pain in the paws.

All in all, if your Doxie is licking their paws, the first thing to check is for a medical reason. Examine the paws thoroughly for anything wrong or any signs of inflammation. Make sure you see your vet to double-check. 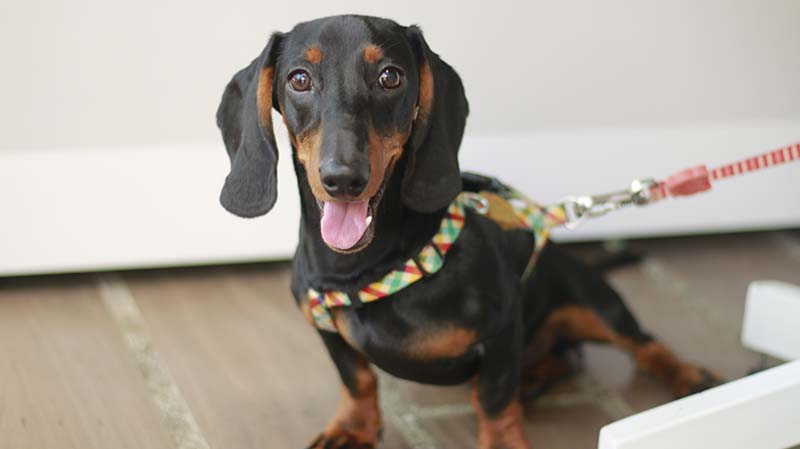 A common cause of paw licking is atopic dermatitis or allergies. Most allergies come from a dog’s environment, such as pollen or grass spores, so always check if this is what is aggravating your dog’s skin first.

What about food allergies?

About 10% of allergies are from food ingredients. Contrary to popular belief, it’s usually ingredients like chicken or eggs that are the culprits. But if your dog is licking or itching because of allergies, you will need to go through the process of identifying the cause.

A study by the University of Helsinki found that puppies fed raw food grew up to have 182% fewer environmental allergies by the time they were adults. However, raw food should always be properly balanced by a nutritionist before feeding it to your dog.

Sometimes behavior that starts as responding to a medical problem such as an allergy can become a habit. Even if after you have treated a medical issue, your Doxie may continue to lick their paws.

This is usually a sign that your Doxie is bored, anxious, or stressed and developed a compulsive behavior to help themselves cope.

Dachshund licking: when to worry

If your Doxie is licking a little here and there, there is usually nothing to worry about. It is a perfectly natural behavior. However, the following are signs that something is wrong and it’s time to take action:

If you see any of these signs, your Dachshund may be in distress and need medical attention. The problem may also be psychological, in which case we will discuss solutions below.

On a related note, the Dachshund has a powerful sense of smell. If they tend to lick you at the same spot, especially if there happens to be a mole or some kind of irregularity in your skin, pay attention. It may be a good idea to have a doctor check it out. 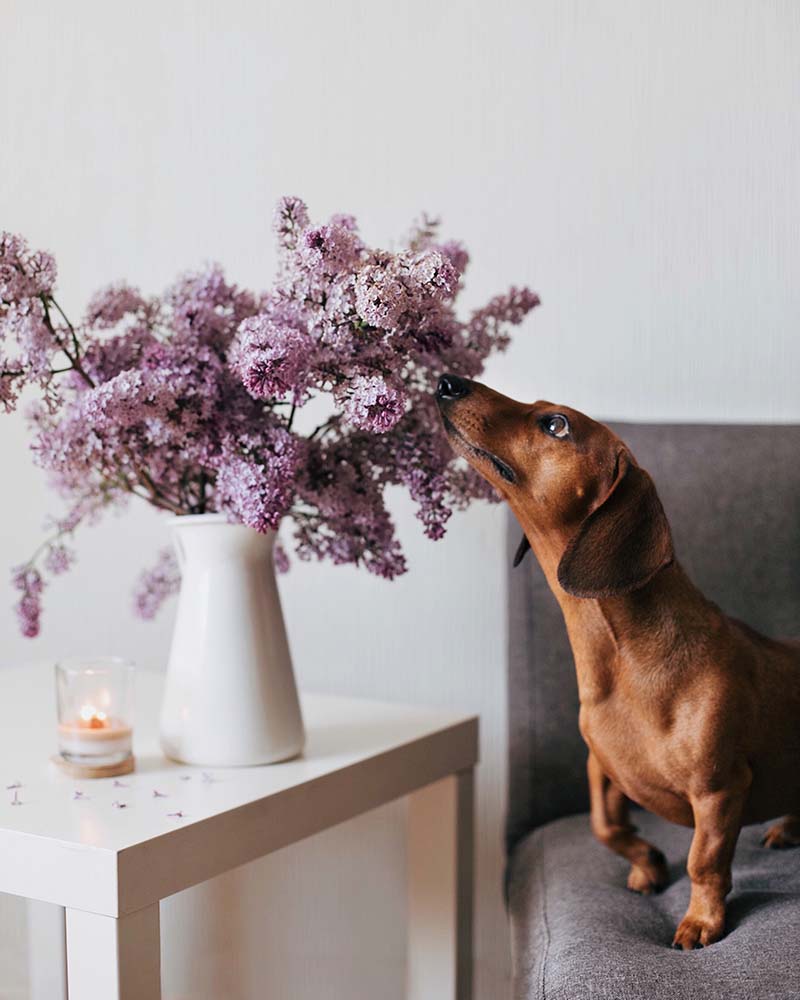 How to stop my Dachshund from licking?

The first thing to do to stop Dachshunds from licking is to identify the reason. If they are licking themselves, look for medical causes. Examine the paws, skin, and fur. Look for inflammation, lumps, heat, foreign objects, or anything that may be causing discomfort.

Secondly, take your Doxie to the vet to have them checked out. Be sure to rule out any allergies and take time to manage their environment to keep the allergens away.

Increase the amount of physical activity

If you are sure there is no medical reason, then it’s time to begin behavioral modification. If your dog is licking themselves compulsively to self-soothe, then start by increasing the amount of physical activity and playtime they have.

Increasing their exercise allows them to destress and get their feel-good endorphins more productively. You can also try involving them in some training or beginning earth dog trials. Earth dog trials make use of the Dachshund’s natural instincts and allow for mental stimulation. By tiring your dog out this way, they have less pent-up energy that can turn into anxiety and result in excess licking.

Do you know the Kong?

Another great trick is to keep them distracted with something better. This can include filling a Kong for them to lick out or giving them puzzle toys.

Dachshunds are also deeply attached little dogs and are prone to separation anxiety. Licking can often be the result of being left alone for long periods.

If possible, make sure your Doxie always has company at home, and if they do need to spend some time home alone, then invest in exercise and place training to help them learn to be okay on their own. 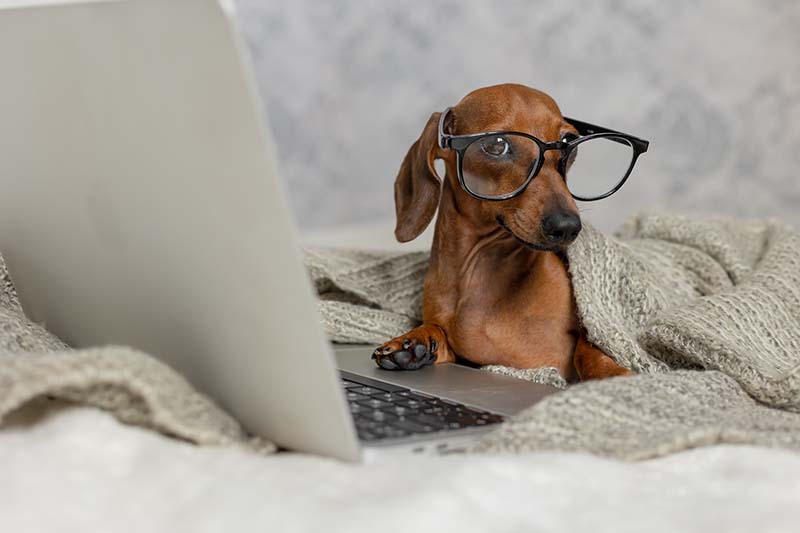 If your Doxie is licking you excessively and you find it annoying, set a time limit where they are allowed to do it. Give them thirty seconds to lick your hands and prove their love, then distract them with a different activity such as cuddling or a small game of tug.

Gradually reduce the amount of attention you give your Doxie when they lick you. Make it a practice to look away and ignore them.

However, be sure that they have another appropriate way that they can get your attention. For instance, if they sit quietly on your lap without licking, be sure to make a fuss and perhaps reward a treat to show that you prefer that behavior to the licking.

We do not recommend applying bitter spray products to any part of your dog’s body. Remember, their noses are incredibly sensitive, so by applying something that tastes bitter, you also force them to live with a terrible smell on their bodies. This is a wholly unpleasant experience for your dog that they won’t understand.

Finally, do not punish your dog for licking. It is a natural behavior, and punishing it may cause anxiety, which may cause more licking. Always focus on identifying the cause of the behavior and reconditioning your Doxie so that they don’t feel the need to lick so much.

A doxie is a tactile, sensitive, and affectionate dog, so a bit of licking is to be expected. This is especially true because of their history as hunters and scent dogs, where the use of the nose and mouth is very important to how the Dachshund interprets the world around them.

A Doxie licking you is usually a sign of submissive affection. It’s bonding time for them, and they can get a powerful hit of oxytocin from doing it. However, it can also be a way to self-soothe anxiety or stress, especially when they start licking themselves obsessively.

In some cases, licking can also indicate a medical problem such as atopic dermatitis, a hot spot, or a foreign object stuck in their skin. It’s important to note any uptick in your Doxie’s licking, as this could be an indicator that something is wrong.

When is it too hot for my dog? How hot is too hot?