Why Do Dogs Lick You? Simple explanation you didn’t know about. 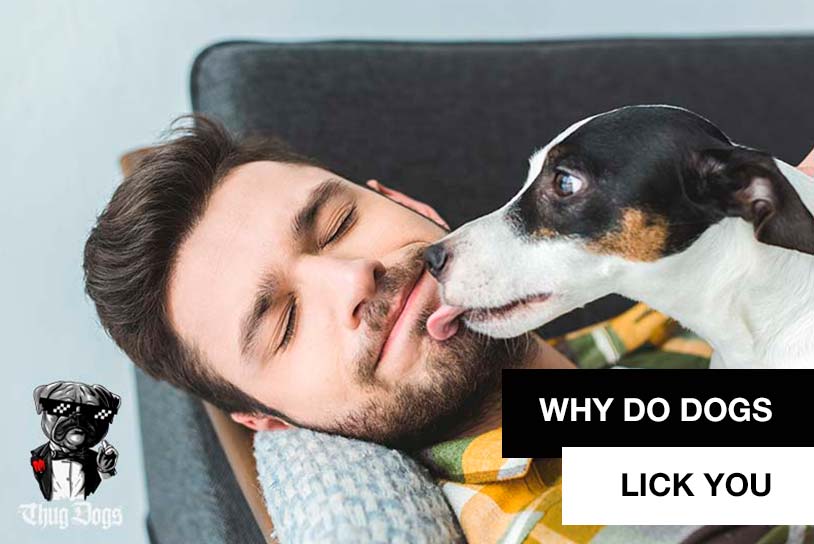 If you’ve ever spent much time around dogs, you’ll probably have noticed that they like to lick. And, it is very often doting owners that end up on the receiving end of their furry friend’s enthusiastic licking.

But, why exactly do dogs lick people? Are dog licks really kisses, as some people believe, or is there another meaning that we should be aware of?

Well, as it turns out, there are several different reasons why a dog might choose to give you a face full of slobber! First, though, it’s worth knowing why they like to lick anything at all.

There is one very good reason why dogs lick so much: it is an instinctive behavior that they all have. That’s why female dogs will lick their puppies to clean and comfort them, and why the puppies will lick their mother right back.

Dogs also like to lick as a way of tidying themselves up. If, for example, you take your dog out for a long walk, you might notice them licking their paws and underbelly once you’re back at home. It’s just their way of looking after their luscious coat by removing excess dirt.

Beyond giving themselves the occasional bath, dogs will also lick themselves to clean up any wounds they have. By doing so, they help to speed up the healing process.

Let’s not forget that dogs like to taste things, too! A dog’s tongue is well attuned to the same four basic tastes that human tongues are, which are sweet, salt, sour, and bitter. And, they also have some more specific taste receptors that respond well to meats and fats.

You’ve probably been wondering whether your dog’s licking is really a sign that they’re fond of you. Well, the answer is a resounding yes! Dogs will often lick people and other animals that they like. But, that doesn’t mean that those being licked always enjoy it.

While it is natural for a dog to lick, bear in mind that it’s not good for them to lick too much. Obsessive licking can be a sign of anxiety or pain in a dog, so keep an eye on how often your dog does it. There might be an underlying issue that needs to be addressed, especially in a stress conditions in nature, as with this Border Collie: 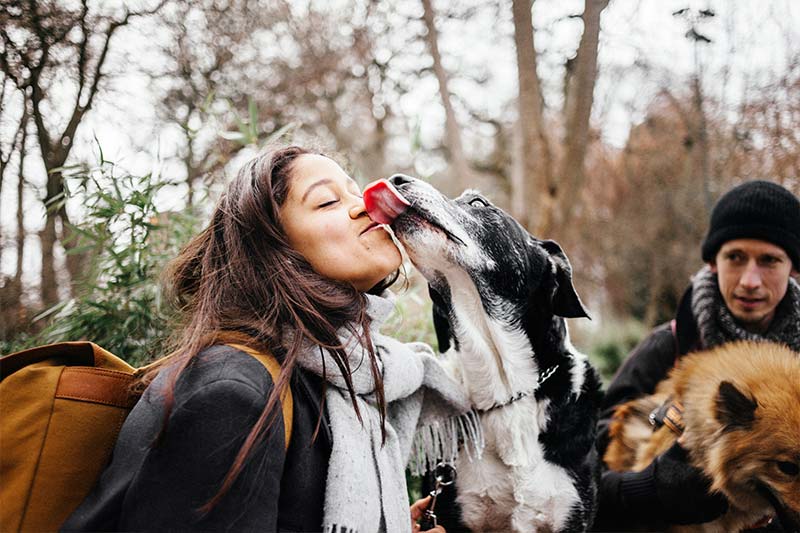 Why Do Dogs Lick You?

It’s not always easy for dogs and humans to communicate their intentions and feelings to one another. So, dogs use licking as a way of expressing themselves to their owner.

Very often, dogs will lick to communicate affection or excitement when they’re around a person they love. However, they also lick to show submission or to appease people they’re intimidated by, just as they would do with more aggressive animals in the wild.

Beyond just showing you how they’re feeling, your dog might also lick you to find out more about you. You see, dogs can detect pheromones in the sweat that humans secrete, as well as water, ammonia, sodium, and other substances that live on the surface of the skin.

In the absence of language and full-color vision, taste becomes a powerful tool for dogs to learn more about the world around them. As such, they might lick you or even a stranger if they want to get to know you better.

Licking is instinctive in dogs, but the way we respond to this behavior can reinforce it. Because many of us recognize that licking is a dog’s way of showing love and other positive emotions, we’ll very often return the favor with cuddles and scratches. Some owners even respond to licking with treats!

As a result, dogs come to realize that they will be rewarded for licking. Not only do they want to show us affection, but they want the positive feedback that they get in response. 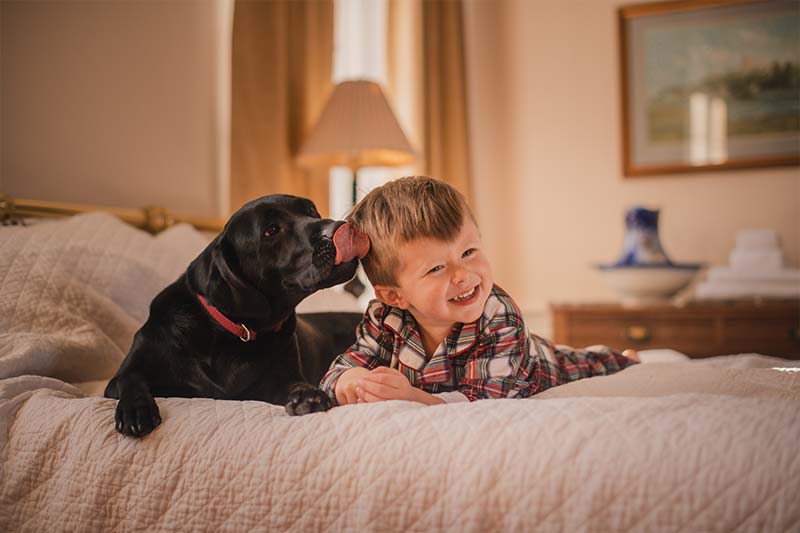 Is Licking a Dog’s Way of Kissing?

Sort of. A lot of the time, when a dog licks you, they do so to show you that they like spending time with you. However, a dog wouldn’t give you a kiss in the romantic sense. Rather, they just want to let you know that they appreciate you and are excited to see you.

Additionally, not all dog licks are particularly positive. In fact, sometimes, they’re a sign of stress, pain, or even fear.

Is It Safe for Dogs to Lick People?

However, dog’s mouths are not all that hygienic. They’re actually full of bacteria and infections. But, while most people won’t feel any ill effects from the occasional lick, children, pregnant people, and those with compromised immune systems should steer clear. 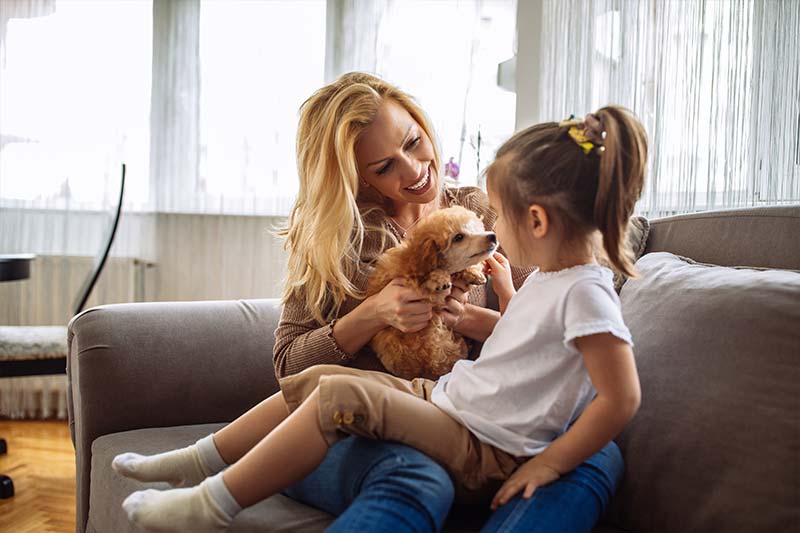 How Do You Teach Your Dog to Stop Licking You?

There are plenty of reasons why you might want to stop your dog from licking you. Maybe you’re worried about catching an infection, or perhaps you don’t want to keep reinforcing the behavior with treats. Or, quite simply, you might just find being licked a bit off-putting.

Whatever the reason, you’ll need to start training your dog out of the behavior. To do so, simply leave the room whenever your dog starts to lick you.

If you ignore the behavior completely and let your dog know that it’s causing you to walk away, they will eventually stop trying. 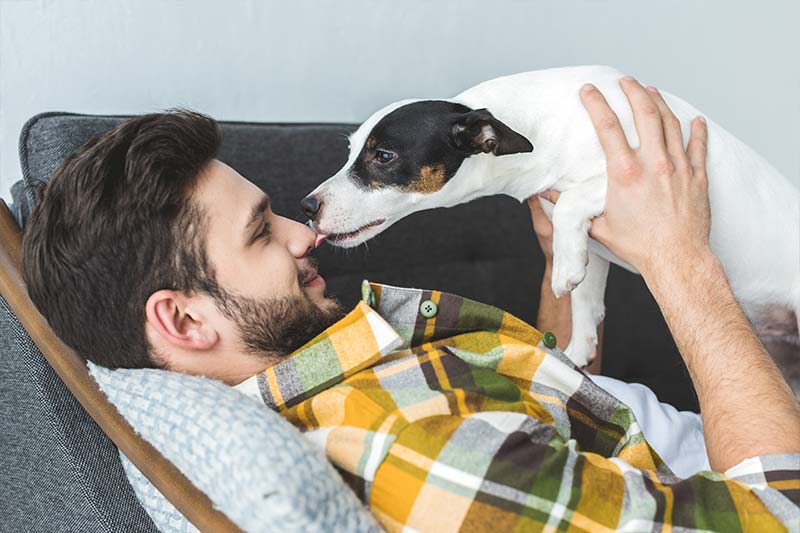 So, Why Exactly Does Your Dog Lick You?

There are lots of different reasons why your dog might lick you. For one thing, it’s in their nature! Dogs lick people, objects, and other animals instinctively, to show them emotions that range from love and affection to fear and submission.

If you’re closely bonded with your dog, chances are they’ll want to get to know you better, too. Tasting the sweat on your skin helps them do just that.

Just remember that, if your dog licks you or itself obsessively, it could be a sign of an underlying problem. Get in touch with your vet if you’re at all concerned about your pet’s compulsive licking habits.