Is Chicken Bad for Dogs? 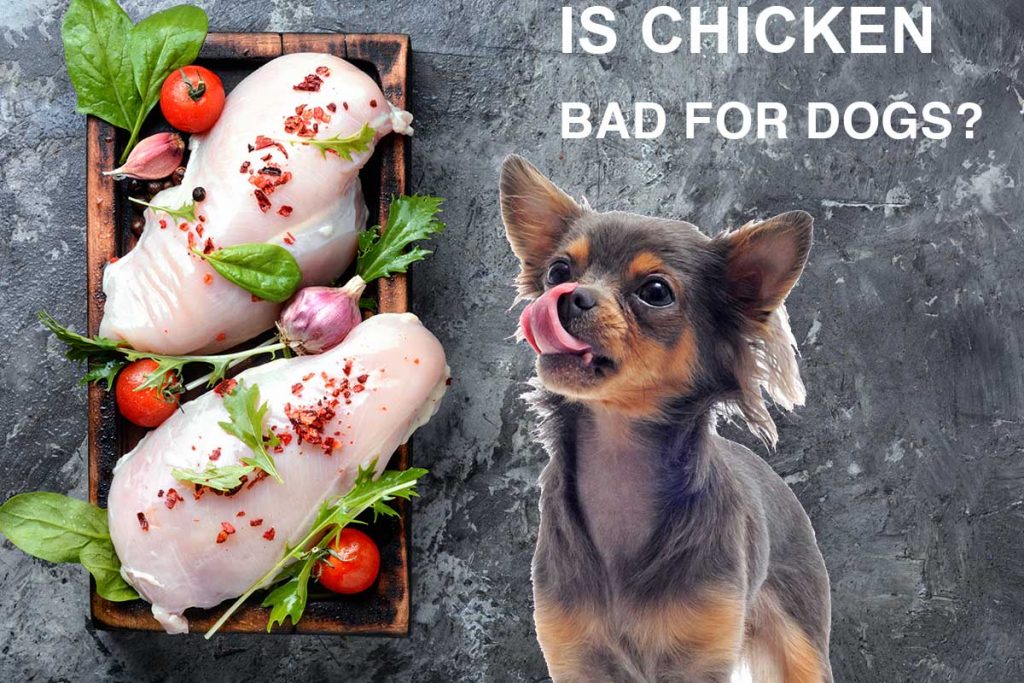 Is chicken bad for dogs? Can they get diarrhea or even cause a skin or ear allergy? Can chicken affect my dog’s joints?

Chicken floavor is very popular and as an ingredient we can find it in many commercial dog foods. As a lean protein, chicken typically has many benefits. In addition, we usually think of chicken as a healthier alternative to most red meats, so it often makes its way into our dogs’ diets. But, is possible that chicken can be bad for dogs?

Is chicken bad for dogs? Can chicken make dogs sick?

There are several ways chicken can make your dog sick. These range from zoonotic diseases to an upset tummy or promoting inflammation in the body. While the severity can vary greatly, there are a couple of health concerns that will make you think twice before feeding your dog with chicken. 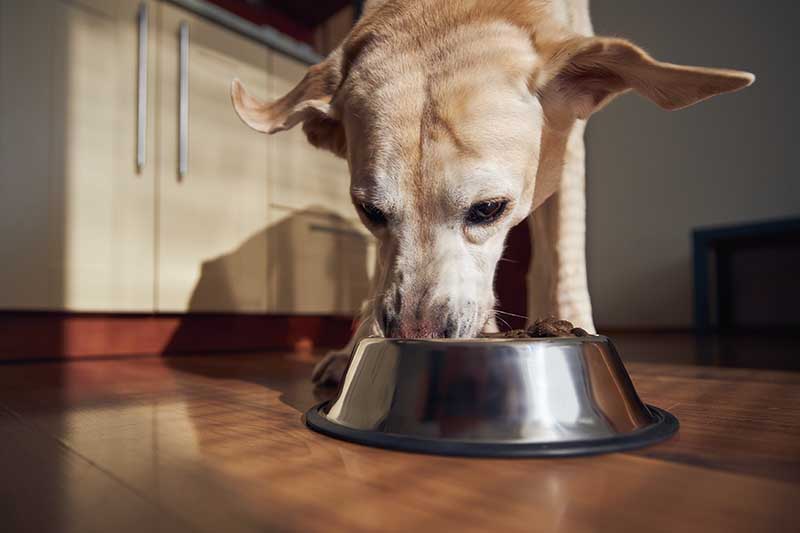 Can chicken meat cause diarrhea?

Chicken can give dogs diarrhea. There are a couple of reasons that chicken causes diarrhea in dogs. First, a dog that has never had chicken can get diarrhea the first time they eat it.

Just like humans, some dogs can have a more sensitive digestive system. A dog who is sensitive to new foods should start with small meal portions. Sometimes even a gradual introduction to a new food can be too much, in which case the food in question probably won’t become a part of your dog’s diet.

The preservatives in chicken can also give a dog diarrhea. Specifically, some of the preservatives deemed fit for human consumption can lead to serious health concerns in dogs. Frozen chicken often contains brine to hold its shape. While that doesn’t pose much of a health risk to humans, it can cause diarrhea in dogs.

If you are feeding a completely meat-based diet, you may also end up with  kidney issues as well as diarrhea. There is also a problem with the fiber content of all purely meat-based diets. It isn’t surprising that meat is not a viable source of dietary fiber. Dogs rely on dietary fiber more than obligate carnivores like cats.

Dogs need this kind of fiber to maintain a healthy digestive system. So, even though it is not a problem exclusive to chicken, a diet consisting primarily of chicken can cause diarrhea.

Diarrhea is also a symptom of other health concerns linked to eating chicken.

Is chicken good for dogs? Raw chicken can contain bacteria

Chicken can host a lot of harmful bacteria. So we know to take care when working with raw chicken and the importance of making sure it gets cooked. Unfortunately, many dog owners feed their dogs a raw diet consisting of chicken. Often even ‘cooked’ chicken meals for dogs are not safely prepared. 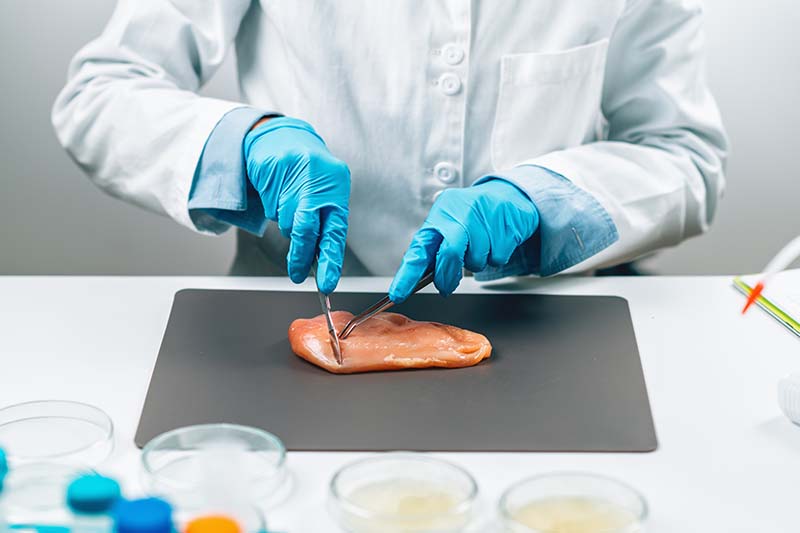 There have been an alarming number of subsequent product recalls. Trusted commercial dog food brands had produced and sold chicken-based contaminated with salmonella. Unfortunately, these recalls often came too late, with many dogs dying as a result.

In addition to Salmonella, chicken also harbors campylobacter bacteria. It is a bacteria that causes similar symptoms to those of salmonella.

There are no confirmed statistics for how many dogs contract campylobacter bacteria from chicken. However, with over 1.6 million human infections every year in the US alone, it is safe to assume that the numbers are concerning.

Both Salmonella and Campylobacter bacteria can easily cross the species barrier. That means that you could contract either from your dog if they get infected.

Is chicken good for dogs? Allergies and inflammation

Chicken is an ingredient in many different dog food products. That is concerning when one learns that chicken is one of dogs’ ten most common allergens. To be fair, food allergies are only about 10% of all total allergies that dogs can have, so the chances of a chicken allergy are fairly low.

In addition to diarrhea, an allergy to chicken can cause several symptoms. These range from relatively mild to potentially life-threatening and include itching, vomiting, and weight loss.

An allergy to chicken can cause behavioral changes like aggression, hyperactivity, or lethargy in some cases.

If you think your dog is allergic to chicken, your vet will be able to do tests or recommend an elimination trial to make sure.

Naturally, an allergic reaction triggers an immune response, which invariably leads to our next inflammation. However, that is not the only way chicken can trigger an inflammatory response.

Chicken and inflammation in dogs

Inflammation is a natural part of a healthy immune system. It is the immune system’s response to any potential invasive threat. Such a threat could be anything from bacteria in a wound to a broken bone. 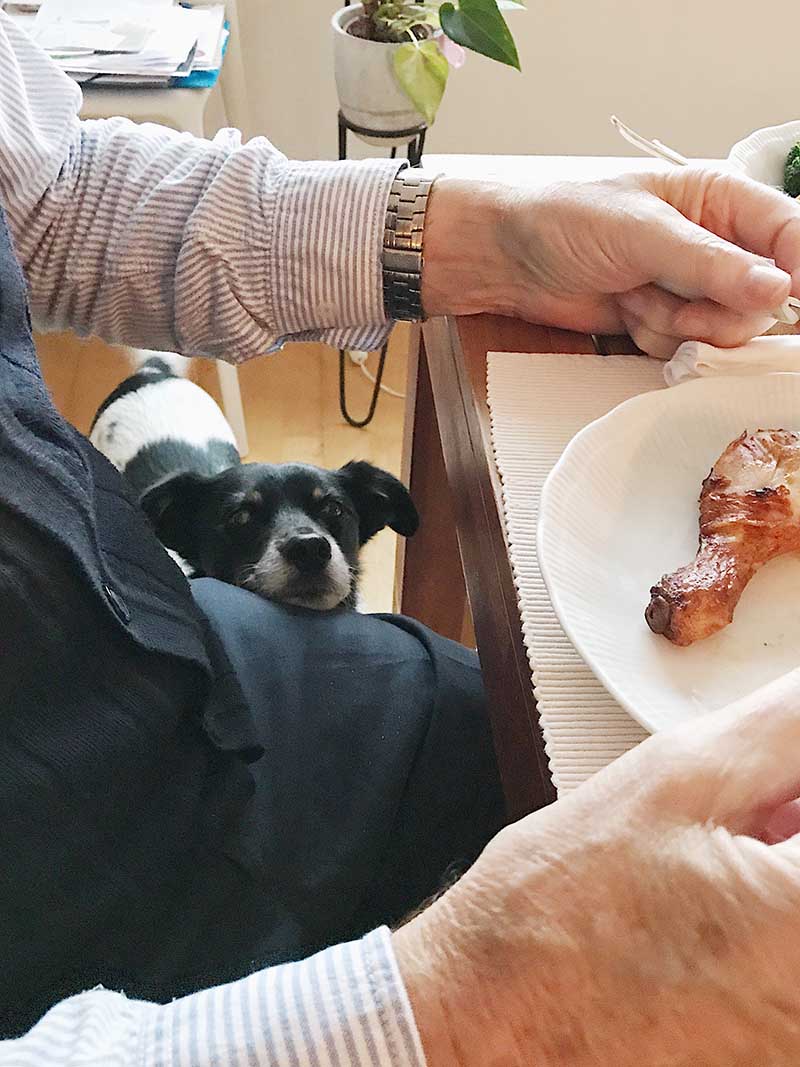 Inflammation is also the first immune response, starting almost immediately after an infection or injury. The inflammatory response is the same in all mammals at the microscopic level and has five defining characteristics.

Increased blood flow leads to redness and heat while swelling results from fluid build-up. A combination of the chemicals released by immune cells causes pain, and the combination of the symptoms mentioned above causes a reduction in function.

While a dog needs acute inflammation for a functioning immune system, chronic inflammation leads to a host of health issues, such as osteoarthritis.

Chicken meat has “omega” fatty, but which one? Is chicken good for dogs anyway?

Many brands advertise that their dog food is high in ‘omega fatty acids,’ which we consider essential fatty acids. Only, for omegas to be healthy, they require a certain amount of balance.

Chicken is very high in omega-6 fatty acids but has fewer omega-3 fatty acids. Unfortunately, the two omega fatty acids work together and need to be balanced to avoid chronic inflammation.

A healthy ratio of omega fatty acids is about 4:1 in favor of omega-6. Unfortunately, chicken falls far short of the ideal ratio, at 17:1, favoring omega-6. Chicken fat can be as high as 40:1, which can definitely contribute to chronic inflammation if not properly balanced with omega-3s, EPA & DHA, found in fish oil.

Antibiotic-resistant bacteria in chicken for dogs

Chicken farmers often give their chickens enormous quantities of antibiotics. They do this for two reasons. First, it gets done to stop infections before they happen. Second, and more unsettlingly, the antibiotics make the chickens grow faster.

These strains of antibiotic-resistant bacteria can cross the species barrier. Furthermore, they are very difficult to treat and pose a far greater threat than strains that respond to antibiotic treatment.

What’s more, the residue of drugs and antibiotics in farmed chicken reside in the birds tissues and bones. This may contribute to inflammation and other severe health problems.

Should you cut chicken from your dogs’ diet completely?

You don’t have to cut chicken from your dogs’ diet unless they experience an allergic response. Even though there are many risks to feeding your dog chicken in moderate quantities, well-prepared chicken is a great source of protein. However, you may want to incorporate more non-farmed fish into your dog’s diet, depending on their nutritional needs. A dog eating chicken can also benefit from vitamin E and fish oils.

Nutrition is a complex subject. Not only does every species have a set of unique dietary requirements, but individuals within a species also have varying nutritional requirements. We see this in humans, and it applies equally to our pets.

The ideal diet for one breed of dog can be detrimental to another. Even individual dogs within the same breed can have different allergies and food intolerances that require a custom diet.

For example, some Dalmations struggle to break down the purines in red meat. That makes a moderate amount of chicken a better source of proteins for this breed.

Therefore, as with any food, chicken can form an important part of most dogs’ diets.

The nutritional value of chicken depends on the way it gets prepared. In commercial dog food, chicken by-products are often subject to production processes. 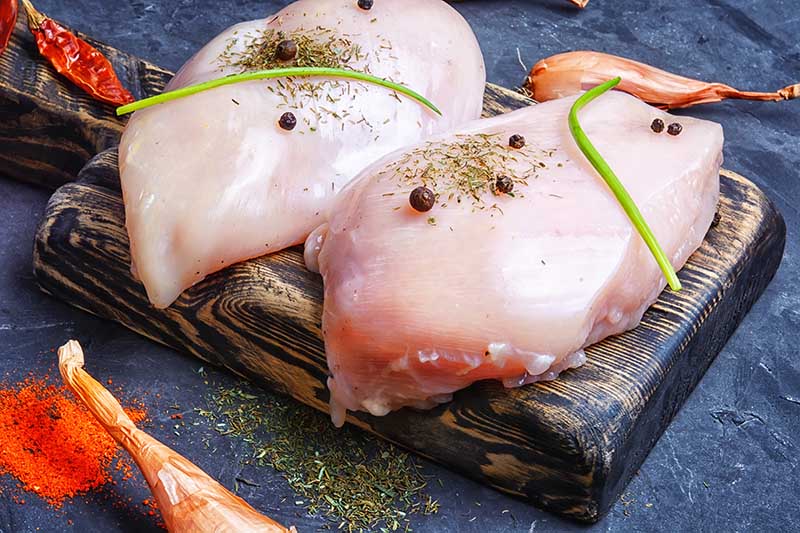 Is chicken suitable for dogs as a staple diet ?

No, aside from the risks we have discussed, chicken does not meet all dogs’ nutritional needs on its own. Even without the risk of pathogens, allergies, and inflammation, the highest quality chicken would still fail to provide your dog with a complete diet. However,  chicken is  still appropriate to most dogs as a good protein source when it is properly balanced with other ingredients. Every diet should also consider a dog’s individual nutritional needs, according to their age and health.

Chicken is not inherently bad for dogs, but it does pose several potential health risks. For example, an allergic response can be as mild as a slight itch or see your dog vomiting, suffering from diarrhea, and losing weight.

Most of the health concerns associated with feeding your dog chicken involve the amount of chicken in their diet and how the chicken gets prepared. However, a small amount of carefully prepared chicken can form part of a healthy diet.