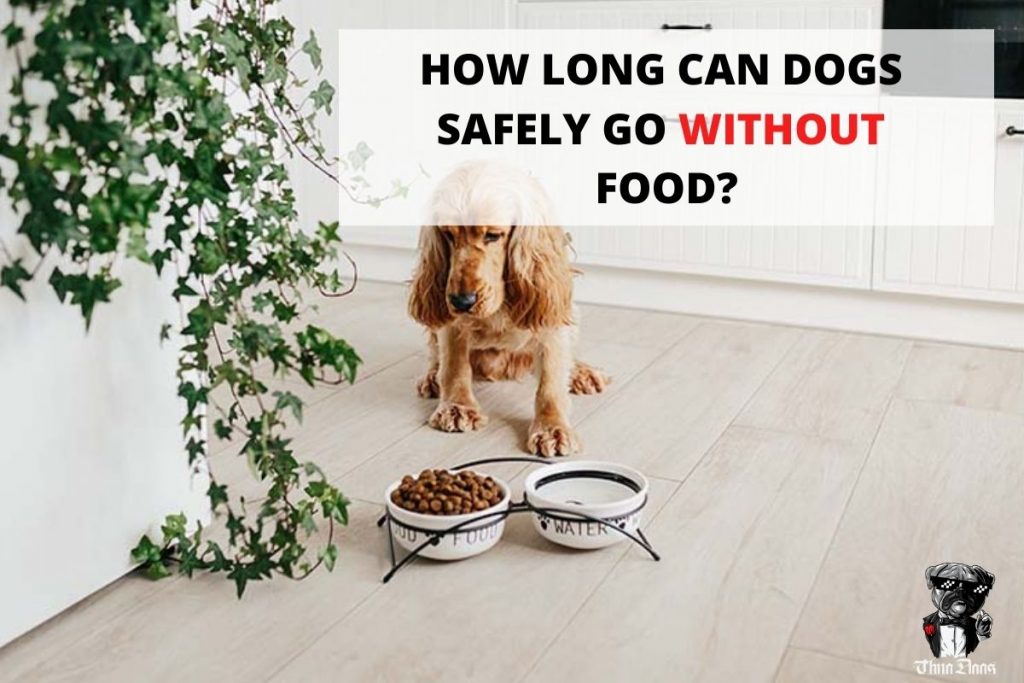 From the moment they chew the food and swallow it  – to their next toilet break, their bodies are working on processing and extracting as much nutrition from their meals as possible. While dogs evolved from wolf-like ancestors, many things have changed about the way they behave.

Dogs have become more vocal and changed the way they express how they’re feeling to communicate with us. Their genetic makeup for their gastrointestinal system, however, remains pretty unchanged.

Feed your dog twice a day if possible

Anatomically, wild dogs and wolves consume large meals and use that as an energy source over a long period. If prey was scarce, they may not be able to eat for another day or two so periods of fasting were perfectly normal. Just like their ancestors, missing a meal or two isn’t the end of the world. However, to keep their digestion running smoothly, feeding them twice a day is expert recommendation.

Food takes up to ten hours to be fully digested meaning if fed approximately every twelve hours it gives their body time to remove the waste of their last meal and not get too hungry between feeding.

Two meals a day may be ideal for your dog and convenient for you but they still have the physiology that means they can sustain themselves on more scarce mealtimes. They start to use energy stores in the form of fat when they miss a meal. It may not be an immediate concern that your dog hasn’t eaten but finding out the cause of their lack of appetite is important to make sure you can get them eating again.

While your dog’s lack of appetite may not be an immediate concern or a reason to rush them straight to the vet, you still need to work out why your dog isn’t eating. If a dog doesn’t eat for several days and becomes anorexic, this can become a life-threatening issue.

Lack of appetite in dogs

A lack of appetite is also linked to several diseases and infections so it could be something as mild as them picking up a viral bug that works its way out of their system in less than twenty-four hours to a condition that will need medical attention as soon as possible.

If your dog has a habit of eating things they shouldn’t like picking up scraps of food while out on walks, this may be the first thing you want to rule out for them. Sometimes they can eat something that is too rich or their stomach isn’t used to processing it and the upset can impact their appetite. There are several types of food made for human consumption that dogs can’t eat. Here we are talking about food like grapes, onions, and chocolate. If you know your dog was eating any of these in a large amount, you want to take them to the vet.

Common causes of dogs not eating include stomach upsets and heartburn just like humans but if your dog goes for more than 24 hours without eating, a trip to the vet is your best call to make sure it’s not something more serious. Issues like obstructions in the gut or illnesses like diabetes or heart disease will need treatment and the sooner they receive it, the better.

Just like people, dogs are all different and react uniquely to the effects of anesthesia. Their recovery can depend on what they’ve had done. For example, a dog that has had a routine castrate will likely recover quicker than a dog that had a large mass removed. The more intrusive a surgery, the harder the body has to work to help it recover. So while it seems counterintuitive for a dog not to eat after surgery, their body may be so focussed on recovering and resting, that they don’t get the chemical signals to their brain that they’re hungry.

This is a very normal part of recovering from surgery, humans go through a similar process. How long a dog can do without food after surgery will differ between individuals depending on their breed, age and weight. Typically, your dog may not regain their appetite for a day or two after surgery which is perfectly normal. Their usual food may not be appealing to them but there are some things you can do to continue to encourage them to eat more palatable food during the recovery process.

If your dog isn’t eating for whatever reason and a vet has confirmed that there’s nothing seriously wrong with them, there are a few things you can do before you start to worry and research how to force-feed a dog who won’t eat. Before you panic, there are several ways to quickly and often effectively coax your dog into eating.

Simple methods can include adding warm water to your dog’s food to increase the scent it gives off. Dogs are very scent-driven so if they can smell their warm food wafting through the room, it might encourage them to go and investigate.

Sometimes, it becomes more important to get some form of nutrition into your dog rather than caring too much about giving them a balanced diet. Even an unbalanced diet can give them some much-needed support if they’re feeling unwell.

Offer them their favourite food

If your dog has a favorite food, try offering it to them either on top of their usual food or on its own if it will get them eating. 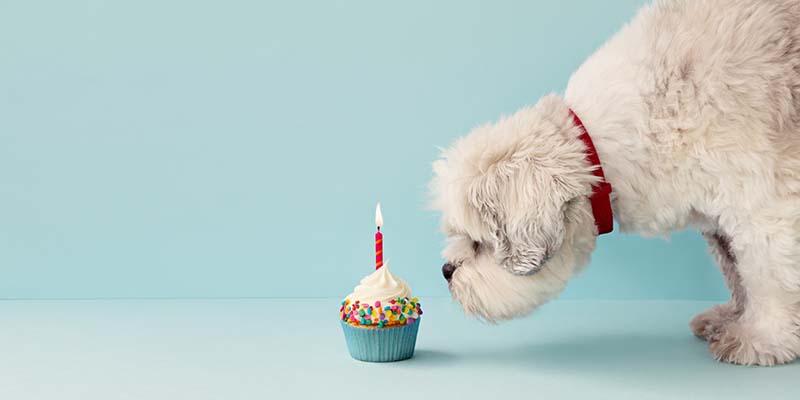 Many companies do special diets. These diets are usually wet food based that are designed to tempt your dog to eat during periods of recovery from illness or procedure. They’re usually very high in protein and highly palatable and won’t upset their stomach. The wet food also aids in adding much-needed water to their diet.

If these meals don’t work you can offer things like freshly cooked chicken that’s still warm, anything your dog might be tempted to try. Smaller meals and more often is also advised when a dog is only just starting to regain appetite.

If you get to the point of force-feeding your dog, you are likely going to need to seek a vet’s help. Malnourished dogs will sometimes need to be tube fed to make sure they’re getting enough nutrition which should be performed by someone qualified.

How long can dogs go without food?

Technically, most healthy dogs can sustain themselves for up to five days with no food. As long as they have access to drinking water and enough body weight to utilize their fat stores, they are safe.

Dogs have survived longer, however five days is considered average. After that they start to develop longer-term medical complications from lack of supplementation. For our pet dogs, a general rule of thumb is to observe them for 24 hours. If they are not eating and if they continue to have no appetite any longer, take them to the vet to investigate.

If they are recovering from surgery or overcoming an illness then a few days  without eating can be normal. However, tempting them with tasty, small meals can help to get them get eating again.

How often does your dog need to drink?

How long can dogs go without water depends on if they’re ingesting water any other way through their diet. If you have a dog that is eating but not drinking, they may be getting some water content through their diet without physically drinking. In these situations, if your dog isn’t drinking you can feed things like tinned food as they have a might higher water content to them.

If your dog is neither drinking or eating so is not getting water at all, they will start to show signs of dehydration after about 24 hours. This includes lethargy and physical symptoms like pale pink gums that have poor blood flow. To test if your dog is dehydrated you can pinch together a small amount of their skin. Hydrated skin will simply bounce back while dehydrated skin will retain that shape for longer.

How long can dogs survive without water?

Dogs can survive without water for approximately three days. However, after the first day they will get increasingly weaker and lethargic. After a few days, they may become too weak to even get to their water dish to drink. Severely dehydration will often need to be rehydrated using an intravenous drip by a vet. 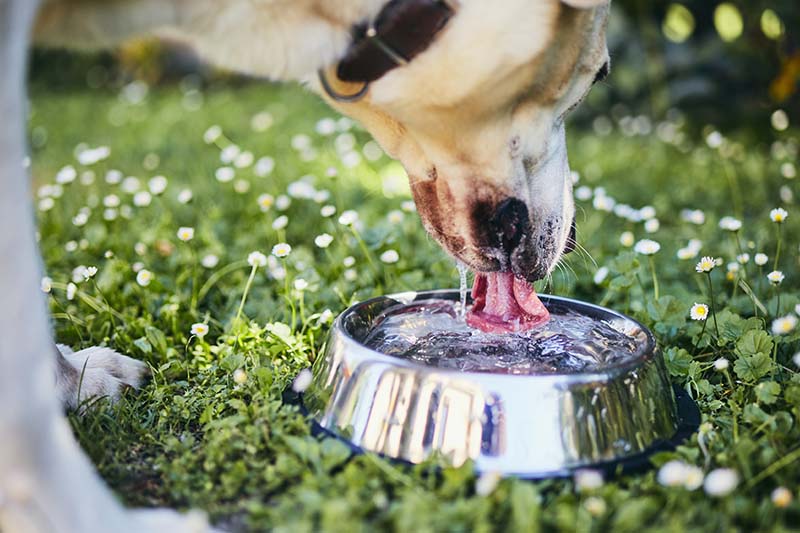 Sometimes a lack of appetite is a symptom of a life-threatening illness or disease. After several days of not eating you would start to see more severe signs like lethargy and weight loss. If you reach five days with your dog has not consumed any food, you would start to notice more severe malnutrition and they would need prompt help from a vet that can include tube induced feeding and an IV drip to support their immune system and digestive tract.