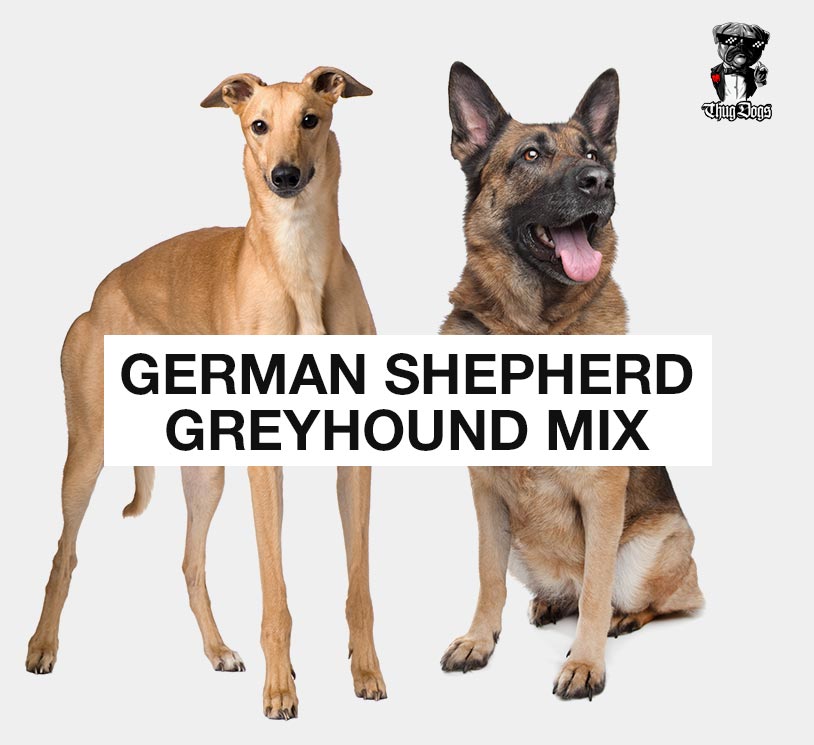 The German Shepherd Greyhound Mix is a sensitive, gentle, and dignified crossbreed between the German Shepherd Dog and the Greyhound. It can be mistaken for a hybrid, but true hybrids are only between two different species, such as the wolf and the dog.

A rare crossbreed, the Greyhound, German Shepherd Mix is also known as the:

As pets, these are devoted and handler-soft dogs, meaning they don’t take well to harsh treatment. They love being close to their owners and may be prone to separation anxiety. But to truly understand the Greyhound German Shepherd cross, we need to understand its parent breeds.

History German Shepherd Greyhound Mix: Where do they come from?

The Greyhound German Shepherd Mix, or Shephound, is a relatively new crossbreed that is quite rare and difficult to find. As with any crossbreed dog, their temperament and physical characteristics can fall anywhere on the spectrum of their parent breeds. To understand them better, it’s best to have a closer look at the breed they come from.

The Greyhound has existed in some form or another for up to 8000 years. Hunting-type dogs that look similar to the Greyhound were revered in ancient Egypt. In fact, dogs with long noses, deep chests, and slender builds are depicted in cave dwellings throughout the Middle East.

Interestingly, the “grey” in Greyhound does not refer to the color of the dog. Which makes sense since most of them are not grey. It either derives from grehundr, meaning “dog hunter” in Old English. Or, it comes from the Saxon word for Greek, which was Grech or Greg, as the dog was thought to come from Greece. 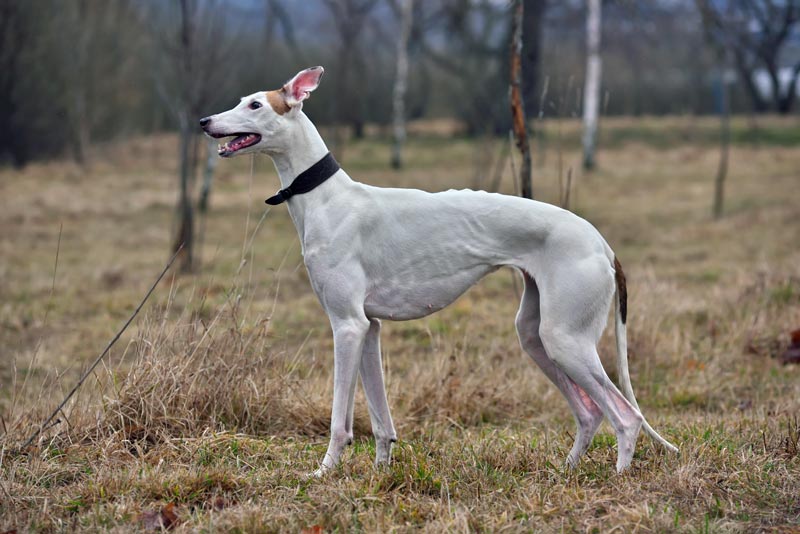 Greyhounds have such a long history. They are thought to have been brought to Europe and Britain by the Romans, where they were used as hunting dogs. And, they may even have reached the Americas with Christopher Columbus.

Their superior hunting ability meant that they eventually became used more and more for illegal dog sports such as dog racing. Unfortunately, today, this is where the majority of Greyhounds can be found.

The German Shepherd Dog (GSD) is not nearly as ancient. They are bred from European herding dogs by Max von Stephanitz in the early 1800s. Von Stephanitz likely used some wolf to create an intelligent, strong, and versatile working dog.

In many ways, he succeeded since the German Shepherd is still used today as one of the world’s best protection and service dogs. 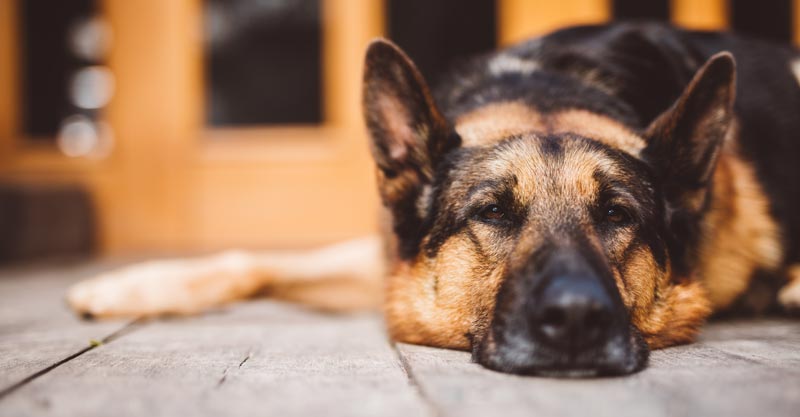 But it should be pointed out that there is more than one German Shepherd line available today. Some, primarily European lines, are still the working dogs of old used in the military and police work. These working dogs don’t always make good pets since they have an extremely high work drive.

Then there are German Shepherds that are bred either as companion dogs or for show purposes. Showing German Shepherds have been known to have temperament issues such as being fearful or lazy since they are sometimes bred more for looks than temperament.

So if you are purchasing a German Shepherd Greyhound mix, ensure that your pup’s German Shepherd parent comes from companion dog bloodlines that are bred to be calmer and better suited to life as a pet than the working or show lines.

What are the physical features of the Greyhound German Shepherd cross?

A German Shephound may inherit its phenotype (the way it looks) from either the German Shepherd or the Greyhound. It’s also possible to look a bit like both, usually like a much slenderer German Shepherd.

Both breeds are large, so you can expect your Greyhound German Shepherd Mix to grow quite tall. However, the Greyhound is quite narrowly built, so your Shephound is likely to be thinner with a more delicate build than the average German Shepherd.

Although black, sable, and fawn seem to be the most common, they can be any of the colors mentioned above. It may also have the high, erect ears of a German Shepherd or the floppy ones more commonly seen in the Greyhound.

No matter which parent the Shephound takes after, it will be an athletic dog with a deep chest and long legs. It’s likely to be a great sprinter, with a tendency to take after a squirrel in the blink of an eye.

When bred from a companion German Shepherd (as opposed to one from working lines) and a standard Greyhound, most German Shephounds should be relatively sedate as adults. Although they may be quite a handful while young. Either way, this will be an active breed that will need considerable exercise and the chance to run.

Although the German Shephound might have an independent streak, they will be deeply attached to their owners. They will do better as inside dogs than outside dogs. They will thrive as part of the family.

Nevertheless, these are not apartment dogs, and they will need space to romp. A house with a moderate to big yard would be ideal.

The German Shepherd Greyhound mix’s diet should be carefully monitored by a veterinary nutritionist to make sure they receive the right balance of nutrients and minerals, as well as the correct amino acid profile for their age.

Bad-quality, dry kibble can lead to health problems later in life. Still, an unbalanced homemade diet can create even more severe deficiencies. So be sure to use a veterinary nutritionist to help you find the best diet within your budget to keep your Greyhound Shepherd cross healthy and living a long life.

As deep-chested dogs, German Shephounds need to be watched for signs of bloat and should not be free-fed or allowed to gulp down their food too fast.

Both breeds are notorious shedders, and neither are hypoallergenic, so this is not the dog for anybody with allergies. It will require daily brushing with a good quality slicker brush to get rid of dead hair. If it has a longer coat, it may need a seasonal blow-out twice a year.

Other routine care will include regular trimming of the nails, cleaning the ears, and brushing the teeth since dental issues are tied to all sorts of other health problems. These include everything from diabetes to heart and lung issues.

A Greyhound German Shepherd mix will need quite a bit of exercise, so make sure you are up for the challenge.

However, be careful not to overdo it with puppies since the growth plates in their legs can easily be damaged. This means that exercise needs to be limited until they are at least eighteen months old. Try to avoid slippery surfaces, jumping, running long distances, or stairs while they are growing.

As adults, the Shephound should get between one and two hours of exercise a day. While some of this can come in the form of walks and hikes, they will need the opportunity to run and really get their heart pumping. For this, you can look into sports such as bikejoring or cani cross.

Unfortunately, the German Shepherd Greyhound cross breed is prone to many health issues that every owner should watch out for. These include:

Other conditions that a German Shepherd Greyhound mix may be prone to includes::

What is the German Shepherd Greyhound’s life expectancy?

The Greyhound is generally a longer-living breed than the German Shepherd, so you can expect a mix between the two to fall somewhere between the two breeds, from nine to fourteen years.

The trainability of a Shephound: Temperament and Intelligence

The Greyhound German Shepherd mix is likely to be a sensitive dog that will not do well with harsh treatment. While highly intelligent, their Greyhound hunting instinct may make them harder to train than their German Shepherd parent.

Although they may be happy to learn basic commands, they may be just as happy to forget them if they see something they want to chase, such as a squirrel.

It’s best to socialize these dogs from a young age to avoid becoming too shy or fear aggressive.

They will not enjoy repetitive training, and so training sessions should be kept short, without too many repetitions.

Although they may not be as trainable as the German Shepherd, the Shephound is likely to be a fantastic pet in the right home. That is, they will need a fair amount of exercise, early socialization, and obedience training.

They are sensitive dogs and might not like busy or overwhelming households with many young children. Still, as long as their exercise needs are met, they tend to be laid back, watchful and devoted pets.

In general, the Shephound should get along great with other pets, provided they are raised and socialized with them from a young age. Socialization is critical for such a large dog.

Both the Greyhound and the German Shepherd have a high prey drive and might be inclined to take off after smaller animals. So be careful to keep them on a leash when outdoors, unless your dog is thoroughly obedience trained.

This means they may also be inclined to chase the cat or any smaller pets, especially while young.

How much does a German Shepherd Greyhound mix cost?

German Shepherd Greyhound pups are rare and hard to find. Some report that designer breeders may charge upward of $ 1000 per pup. But it is possible to get them far cheaper if you happen to find puppies that were bred accidentally.

An even better option is to adopt one. There are countless German Shepherd Rescues that include crossbreeds, which can help you find your perfect Shephound.

The German Shephound is likely to make a sweet and devoted pet. Their Greyhound side might not make them the best guard dogs, although they will definitely raise the alarm if they sense intruders.

They are active dogs who need a lot of exercise but are still dignified to settle into the role of an easy-going family dog once they have matured. They may not be as trainable as the standard German Shepherd but are bound to make exceptional pets for active households.