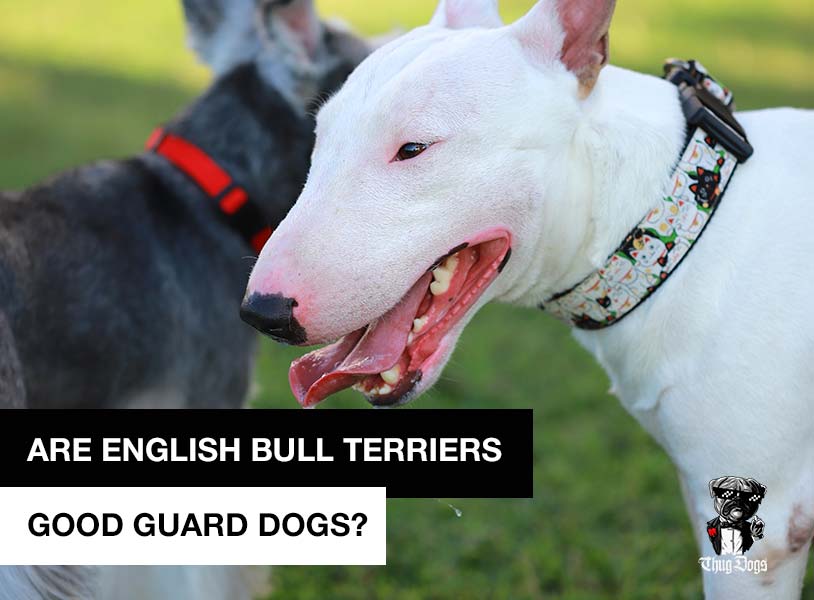 Is an English Bull Terrier a good guard dog?

In short, Bull Terriers aren’t among the best guard dogs, but it does depend on what exactly you are looking for in a guard dog.

A healthy, well-bred, and well-adjusted English Bull Terrier will rarely be aggressive towards people, including strangers.

They might easily allow a stranger in the home without as much as a tail wag’s worth of acknowledgment. This is preferable to the alternative when it comes to English Bull Terriers. Poorly socialized, un-neutered males, in particular, can become territorial and aggressive.

But this is not a desirable outcome. In this scenario, a Bull Terrier’s aggression towards strangers is usually erratic and hard to control. This is the kind of thing that would lead to tragedy or a lawsuit before it ever served to protect your home and family.

The well socialized, trained English Bull Terrier is neither aggressive towards people nor is it territorial. They often allow strangers on their property without sounding an alarm since they are primarily companion animals who love people. These are not the ideal qualities one wants from a guard dog. 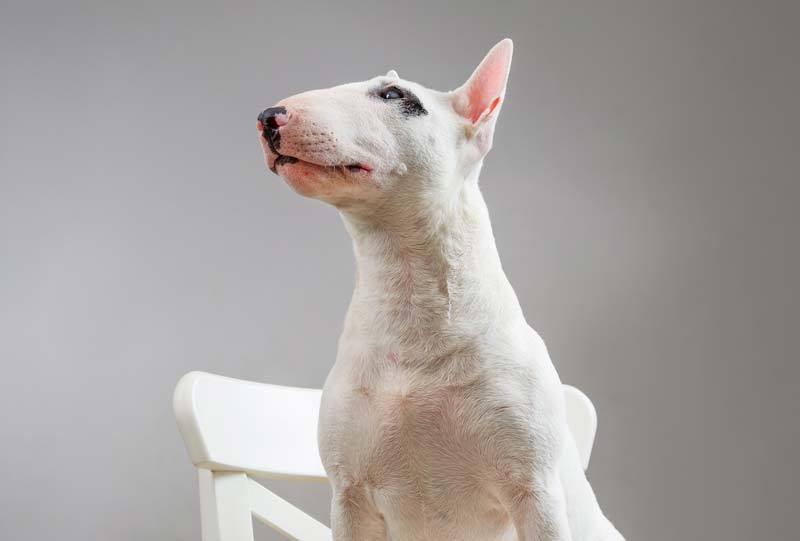 While they are generally friendly in the presence of humans, their breeding history does make them more prone to dog aggression.

As unlikely as they are to attack a stranger in your home, they are liable to get into nasty squabbles with strange dogs. As a dominant breed, the English Bull Terrier will benefit from the guidance and training of an experienced owner.

But to truly understand the Bull Terrier and its reluctance to bite people, we need to look at their history.

History of the English Bull Terrier

The English Bull Terrier owes a number of its defining characteristics to its ancestry. The earliest incarnation of the iconic breed came in the 1800s when England banned blood sports. The banning forced dogfighting underground. Literally.

The ‘underground’ fights took place in pits. Soon, dog was pitted against dog. Faster, more agile dogs proved more successful. The heavy-set Bulldog, long famous in the blood sport of bull-baiting, was at a disadvantage in this new arena.

The tenacity and bite strength of the Bulldog would prove a quality too valuable to lose, despite the dog’s disadvantages in pit fighting. Rather than seek out a different breed, these breeders sought to cross it with a more agile dog. 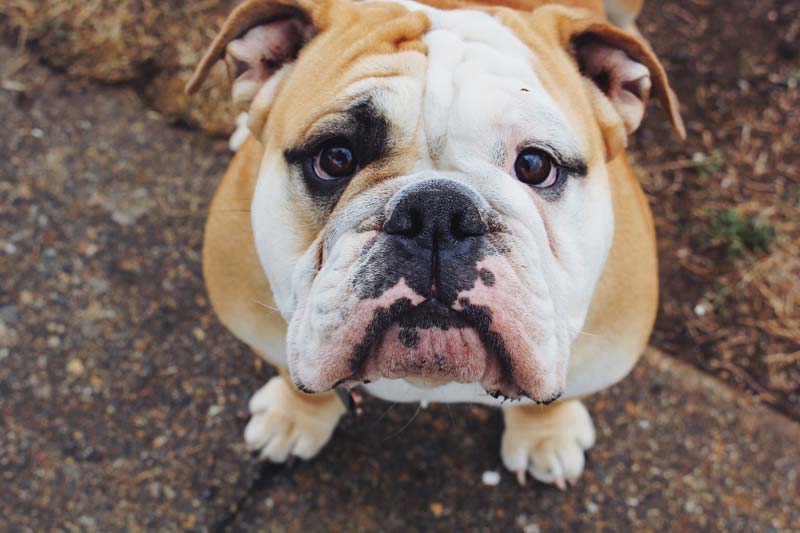 Old English Terriers had long been prized for their skill at vermin extermination. They had all the agility that the breeders supplying the illegal trade were looking for.

But, they lacked the aggression, brute strength, and bite force of the Bulldog. This made them poor candidates for pit fighting but excellent candidates for outcrossing.

The earliest hybrids were called Bull and Terriers. The crossing offered the best of both breeds. A powerful fighting dog, nimble and robust. It could end a fight with a single bite.

The selective breeding that followed favored dog aggression. In time this blueprint forked into bloodlines that would be recognized as breeds in their own right. This is the origin of most of the bull-type terrier breeds still popular today.

The key here is that while these dogs were bred for dogfighting, owners needed to step in and break up a fight without being bitten themselves. This meant they couldn’t risk having dogs that were aggressive to humans, only to other dogs.

This is one of the reasons that most Pit Bull type breeds are usually far more aggressive to other dogs than what they are to humans. This includes the English Bull Terrier.

The decades of selective breeding favoring dog aggression saw residual traits like territorial behavior, and human aggression diminish. The upshot was that the Bull and Terrier made for a good companion dog.

As they entered mainstream society, the popularity of the breed led to a new type of refinement. Selection started to focus on the Bull and Terrier’s companionable traits. Secondary characteristics, like the distinctive egg-shaped head, became sought-after features for the show ring.

These were not yet the English Bull Terriers we know today. Not until a breeder by the name of Hinks took an interest. Predicting the breed’s popularity, he decided to breed and refine his own take on the Bull and Terrier formula.

Hinks aimed to smooth out the ‘rough edges’ as he saw them. By selectively breeding for a more ‘refined’ build and personality, his ‘Bull and Terrier’ eventually became the familiar, modern English Bull Terrier.

One of the keys to the success of Hinks’ Bull and Terrier was the all-white coat. He anticipated the appeal of the milky white coat and decided it would be a distinguishing trait for his Bull and Terriers. Hinks achieved it by deliberately breeding Dalmatians into his bloodlines early on.

When this striking new ‘English Bull Terrier’ turned out to have a charming and exuberant temperament, its success was sealed.

The English Bull Terrier derives many of its characteristics from its colorful heritage. Yet, one should keep in mind that it has been nearly a century and a half since last they were bred for the purpose of fighting. 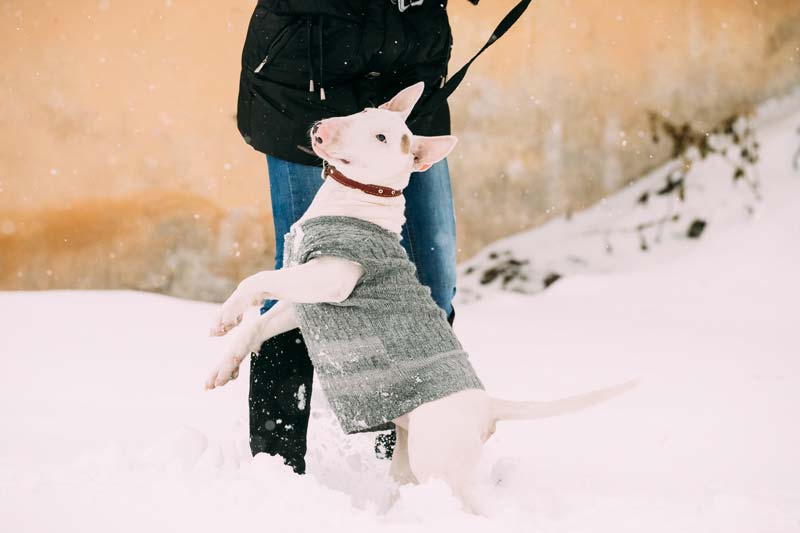 Understanding their history helps dispel many of the misconceptions about their aggression, and it grants us insight into their origin. It also helps to clarify why the English Bull Terrier lacks many of the qualities associated with good guard dogs.

Will an English Bull Terrier protect me?

The English Bull Terrier is generally a fearless and devoted dog to a good owner who understands them.

While they usually do not have the instinct to protect your property, they are inclined to protect their owner. Their response to a perceived threat will vary. Your English Bull Terrier’s personality, bloodlines, and upbringing all factor into how protective they may be.

For many, the English Bull Terrier’s reputation and looks are protection enough. Few people have the nerve to take on a Bull Terrier.

Still, protection is not what they have been bred for. Therefore, if you are looking specifically for a dog suited to personal protection, there are other options. The Rottweiler and breeds similarly bred for the role may be a better alternative.

Aggression in English Bull Terriers is often a behavioral problem so you should be really careful, make sure you don’t encourage it. With their powerful bites, they can cause significant damage that can end in tragedy.

Luckily, it is a problem that can be avoided with care. While they are somewhat predisposed to aggression towards other dogs, it is not in their nature to be aggressive towards humans.

Always ask to meet the parents of the Bull Terrier puppy if you are considering buying, and avoid any bloodlines that have aggression in them.

Their ancestor, the English Bulldog, was an aggressive breed. However, selective breeding would later see this trait decline in the English Bull Terrier. Most Bull Terriers are today are fun-loving clowns who enjoy playing and can be a little stubborn.

They still have an exceptionally high pain tolerance and you need to watch them carefully, as they can easily hide injuries.

Most behavioral concerns can be addressed and avoided by an experienced owner. The responsible owner will avoid harsh treatment, to which they may respond poorly. They need early socialization with other dogs to prevent problems, firm boundaries, and loads of patience and positive reinforcement.

A Bull Terrier tends to be highly motivated by food and play, and these should be used to shape good behavior.

Understanding their behavior is essential when navigating interactions between an English Bull Terrier and unfamiliar dogs.

Socialization and training are the most important tools for ensuring a well-behaved, well-adjusted dog. The English Bull Terrier is no different. Their dog aggression can be addressed by starting socialization as early as possible, preferably around three months. 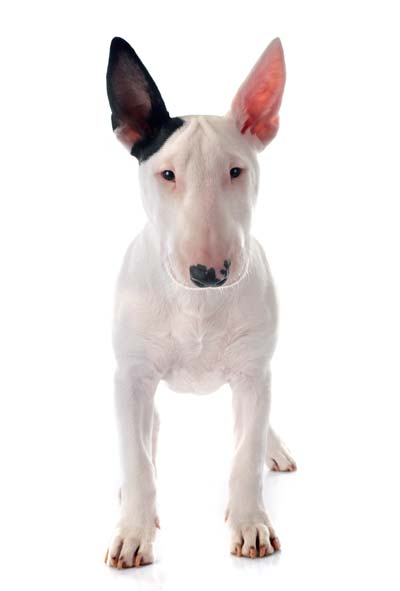 They should attend both socialization and obedience schools. Contrary to what some may think, Bull Terriers are not stupid. In fact, they love having a job to do and will enjoy training when properly motivated.

Socializing will be a continuous process throughout an English Bull Terrier’s life. They respond well to positive reinforcement. Simple motivators like toys or snacks are generally enough to reinforce good behavior.

English Bull Terriers have an unfortunate reputation for aggression.

Believing this reputation to be accurate, many people mistakenly think that the English Bull Terrier will make for an intimidating if somewhat volatile guard dog.

In truth, they are bred for companionship. Their tendency towards dog aggression is a remnant of their heritage. In the care of an experienced owner, it is manageable. It does not reflect any sort of similar aggression towards people and strangers.

While an English Bull Terrier may protect their owner, they are not ideal for those looking for an effective guard dog to guard their family and property.