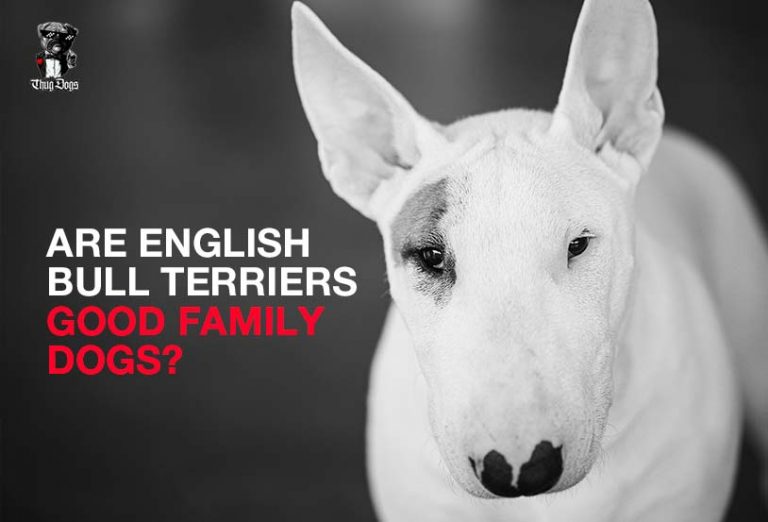 English Bull Terriers are one of the most distinctive and recognizable dog breeds you’ll see anywhere on the planet. People might be a little confused about the dog type, but they’ll never forget they’ve seen this dog before.

In the late 1980s, a famous beer advert was popular featuring a beautiful English Bull Terrier named Spuds Mackenzie. This one TV commercial did more to promote the Bull Terrier and increase the dog’s popularity than the decades preceding the advert.

Whether it was the unique build, the strange head shape, or the antics in the commercial, Bull Terriers captured the hearts of millions of Americans.

While it’s true Bull Terriers have a bad reputation that has followed them around since the dogfighting days in the 19th century, people today still want to believe the dog is dangerous, aggressive, and vicious.

In this article, I want to try and dispel some of this stereotypical thinking about the Bull Terrier. 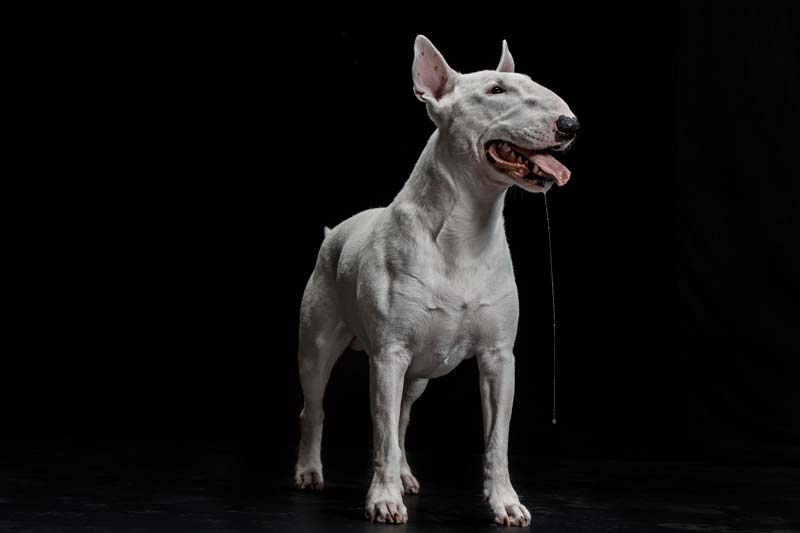 Bull Terrier owners will tell you the dog is often the clown in the room and exceptionally naughty, but they also are excellent family dogs, and that includes children. However, English Bull Terriers are always on the go; they never seem to tire, from a puppy through to late middle age.

If you’re going to become the owner of a Bull Terrier, prepare yourself because you’ll be exercising a considerable amount. Bull Terriers need several brisk walks, with interactive playtime plus any other vigorous games you can play together to burn off the energy this dog has in abundance.

Bull Terriers crave human companionship; you cannot leave this dog alone for hours on end, day after day. They want to be involved in everything the family is up to, and if you ignore the dog, they will become listless and bored, and trouble will follow.

The English Bull Terrier is not an aggressive breed by nature, but that doesn’t mean they won’t be aggressive, just like any other dog breed.

Bull Terriers are people pleasers and demand attention from their owners, and owners must correctly socialize them from a very young age.  Taking the dog to obedience and socialization classes helps get the dog started the best way.

Bull Terriers are not for novice or timid owners because the dog can become dominant if owners don’t show who is in charge. By firmly, I don’t mean using harsh or cruel training methods; it’s not necessary.

Bull Terrier owners will need to appreciate the dog’s temperament and understand they are typically:

Like most terriers, English Bull Terriers can be aggressive to other dogs, especially if they haven’t been neutered. In addition, even if they are well-socialized and appropriately trained, it would still be a risk bringing a cat or other small pet creature within the dog’s vicinity.

Are English Bull Terriers On The Dangerous Dogs List?

In the United States, there is no Federal law that bans dangerous dogs, so there’s no list as such. However, many states are banning the ownership of some breeds, mainly the bully breeds and mixes. English Bull Terriers are one of the so-called bully breeds, so yes, some states ban, place restrictions (muzzles), etc., on Bull Terriers.

If you are seriously contemplating bringing one home, you need to ensure what the legislation is in your home state. 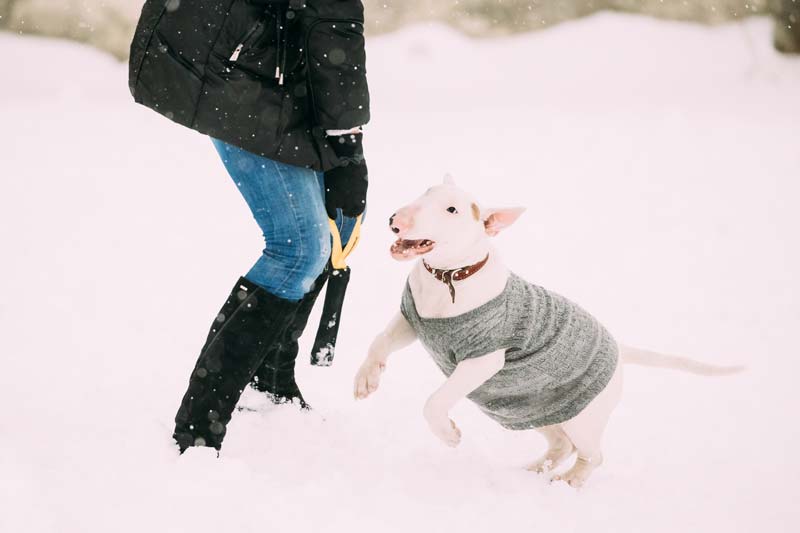 Of the 138 dog breeds on the most intelligent dogs, the English Bull Terrier comes a lowly 124th, making the breed below-average intelligence. But, thankfully, that’s not the whole story when it comes to measuring a dog’s IQ.

A dog’s intelligence measures a dog’s ability to learn commands and how quickly they obey. The faster dogs are at learning the commands, the more intelligent they are.

There are plenty of other famous dog breeds down at the bottom of the class, such as Chihuahuas, French Bulldogs, Pugs, Maltese, etc.

Most of the dogs that top the intelligence list are the most eager to learn and obey owners such as the Border Collie, Golden Retrievers, Labradors, and Poodles.

Obedience and working intelligence is only one way to measure a dog’s intelligence; unfortunately, it’s the only objective measure.

There are two other types equally important, and they are intuitive and adaptive intelligence.

Intuitive intelligence is hereditary and comes from the initial breed purpose; in other words, what work was the dog bred to perform. For example, some dogs were guard dogs, others shepherds, and some retrievers, which is why you might see a Corgi nipping at the heels of the children in his home. No one has taught the Corgi this ability; it’s instinctive.

Only when you own a Bull Terrier can you honestly say if your dog is intelligent.

English Bull Terriers make excellent guard dogs. If a stranger approaches the home, a Bull terrier will alert the owner by barking. The dog has an incredibly protective nature and will take whatever action is necessary to protect the family. Here is more information about the Bull Terrier’s guard dog abilities.

Bull Terriers can live with cats providing you introduced the dog when a puppy. In addition, you would need to extensively socialize your Bull Terrier for greater acceptance of other animals, people, sounds, and sights; plus, socialization needs to continue until a Bull Terrier is mature.

When you bring home your puppy, you should introduce the two animals. Initially, it’s best if they are short introductions and there’s a safety gate separating them. Over time you can gradually make the meetings longer and eventually remove the gate. But, you must be present at all times.

Ensure the cat has an escape route if the puppy becomes belligerent or too enthusiastic; cats need to climb out of the way because running might trigger the dog’s prey drive.

Your Bull Terrier and cat might never become best friends, but they could learn to tolerate each other.

English Bull Terriers are willful, stubborn, and take great delight in pushing boundaries. But does this mean they are hard to train? Well, if you’re an inexperienced or timid dog owner, then I’m afraid it does because this dog will learn how to push your buttons, and if you give up, the dog’s won and he will be the boss in the house; which is not what you want with any dog.

Bull Terriers are intelligent enough to understand what you’re telling them to do, or in the case of Bull Terriers, what not to do.

So the answer is to be firm but kind, patient, and consistent. Don’t give in when you feel like you’re hitting a brick wall. Keep at it, and the dog will get the message you’re no pushover.

How Much Do English Bull Terriers Shed? 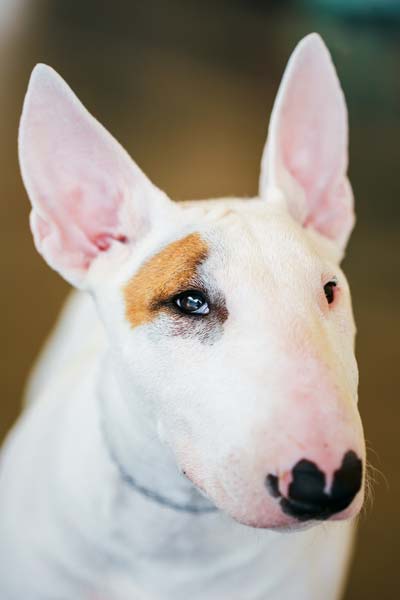 There’s a minimal amount of grooming required when you own a Bull Terrier. They are possibly one of the lowest maintenance dogs you can own. You can Brush them with a slicker once a week; that’s more than enough to get rid of dead hairs. If they get a bit smelly and you don’t want to bath them yet, a wipe down with those scented doggy wipes will do the trick.

However, the Bull Terrier is not hypoallergenic; even though the coat is short and flat to the body, the dog will still shed some hair, and dander is the leading cause of dog allergies.

All dogs are susceptible to genetic health conditions; the same way humans can inherit diseases. However, when you choose a breeder, always pick one that will offer puppy health guarantees. Professional and honest breeders will give you the complete picture of their breeding lines, including any known medical conditions.

While Bull Terriers are typically healthy dogs, there are some genetic health conditions you should be aware of. These include heart conditions, deafness, luxating patellas, eye problems such as ectropion and Keratoconjunctivitis sicca, or dry eye.

On the whole, Bull Terriers are not your typical nuisance barkers. This personality holds for the standard and the miniature size Bull Terriers. They will undoubtedly bark to alert their owners to strangers, as I mentioned earlier, but barking is not a problem with Bull Terriers.

However, we are generalizing here, and there’s nothing to say an individual Bull Terrier might develop a barking habit, for instance, if they are left alone for too long. Remember, Bull Terriers hate to be left alone; they thrive when they’re with family, and being alone can encourage behavior issues.

There’s a lot of information you have to consider if you’re thinking about a puppy and if Bull Terriers make good pets, especially when it concerns your family.

Overall the English Bull Terrier is a fantastic dog, calm, loving, affectionate, and fearless; yes, they can be extremely stubborn and strong-willed.

To answer the question, are English Bull Terriers good family dogs? I would have to answer yes, they are. However,  they will need an experienced owner because they love to challenge boundaries.