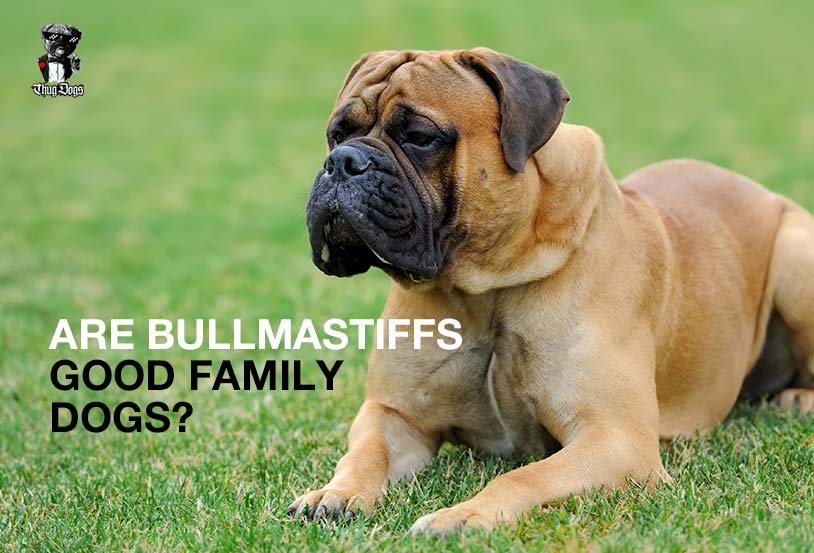 Are Bullmastiffs good family dogs, and do they have the best temperament for a family with kids? When you first see a Bullmastiff, you immediately think no to both those questions. After all, the dog is huge, and they weigh anything up to 130 pounds. What’s more, they look so intimidating with a powerful, muscular body and an enormous head.

Bullmastiffs are not an ancient breed; gamekeepers developed them in England in the mid-19th-century. During those times, being a gamekeeper was dangerous because you had to stop poaching on your lordship’s land, which meant catching poachers red-handed. The only problem was poaching was a hanging offense, so as you can imagine, poachers didn’t fancy getting caught.

Gamekeepers sought a way of dealing with aggressive poachers. They came up with the idea of a large, aggressive dog capable of tracking any poacher and pinning them down until the gamekeeper caught up. Of course, hanging was preferable to getting ripped to shreds by a giant beast, so there wasn’t much fight left in the poacher. 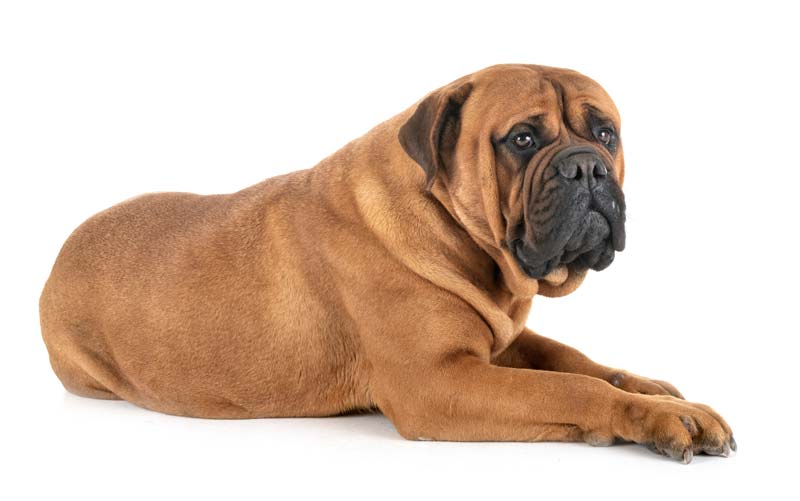 The Bullmastiff of those days was considerably more aggressive than the one today.

Let me begin by saying Bullmastiffs make good family dogs. They are incredibly loyal, calm (some would say docile), and undoubtedly have a kind personality. They are nicknamed “Gentle Giants” for these reasons. But make no mistake, if they believe there’s any threat to their family, they will take action and can be aggressive.

Since those days in the mid-19th-century successive breeding has removed much of the aggressive nature from the Bullmastiff, but the dog still possesses a formidable guarding instinct for those they love.

Because of this, you must socialize your young Bullmastiff puppy as early as possible and should continue until your dog is mature. Obedience training is also essential; if you enroll the puppy in obedience classes, you’ll also begin socializing at the same time. I cannot stress enough how essential this will be down the road with your Bullmastiff because of his temperament.

How Are Bullmastiffs With Kids? 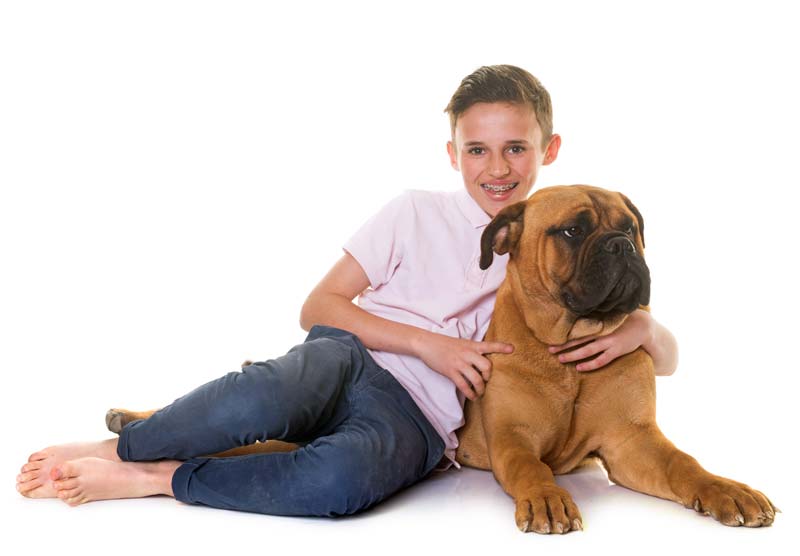 Providing you have begun socializing your young Bullmastiff and including your entire family in the socializing process, a Bullmastiff will love the children. Even other pets will be okay with a well-socialized Bullmastiff.

However, this friendliness often will not extend to other dogs of the same sex. There’s every possibility a Bullmastiff will be territorial and even aggressive if another dog of the same sex comes near.

Are Bullmastiffs Good With Toddlers And Babies?

Well-trained Bullmastiffs are calm and mild-mannered dogs; they might be excellent guard dogs, but typically, barking is not their thing.

Because they are giant dogs, even four to five-month-old Bullmastiffs can knock a young child flying, they must be supervised at all times. If you want your Bullmastiff to be kind and gentle around your kids, you must let them interact as much as possible. Bullmastiffs love family and create powerful bonds, so you must allow your children and Bullmastiff to develop this relationship.

Yes, Bullmastiffs make excellent pets. The dog can get along with most households, singles, couples, and families with children. The only type of owner I have my doubts about is seniors. Not from the perspective, the dog wouldn’t be happy, but owning such giant dogs for seniors might be too much of a handful. Having said that, Bullmastiffs don’t require a lot of exercise, which we’ll discuss in more detail later in the article.

I know I’ve mentioned it a couple of times already, but many of these questions will get a positive response, providing the Bullmastiff is socialized correctly. Their guarding instincts can become overpowering if owners do not take the responsibility of teaching these dogs correctly.

If you find even after you feel you’ve socialized your Bullmastiff correctly, your dog is beginning to show signs of aggression in any way, you should seek professional advice sooner than later. 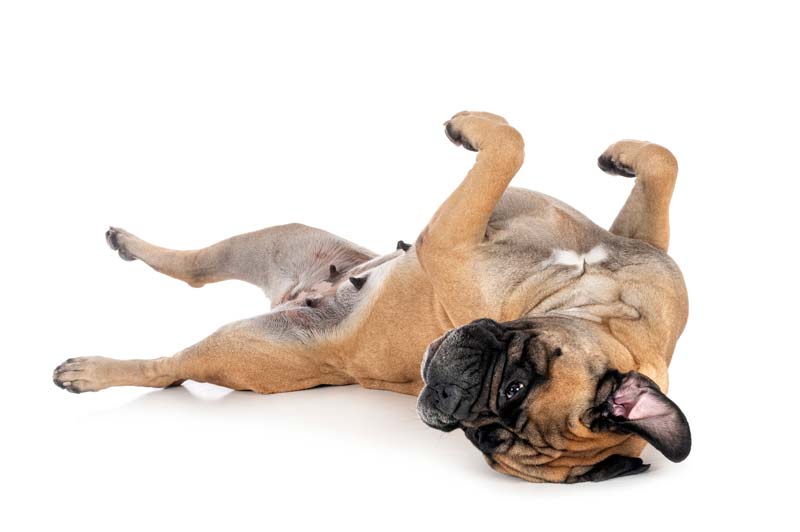 Are Bullmastiffs Easy To Train?

Bullmastiffs are giant, powerful dogs, and any dog this size needs to begin training when they’re very young. Discipline and obedience need to be instilled in the Bullmastiff when they are puppies because when they get to full size without proper obedience training, they can become unmanageable.

Enrolling your Bullmastiff puppy in obedience classes will be fun for both you and your puppy. It also starts off the socialization aspect of the dog’s training.

If you’re not keen on obedience classes, you still need to establish house rules and set up necessary routines your Bullmastiff puppy can follow. Dogs love routines, and it helps the puppy start life securely and enjoyably.

When a puppy is calm, confident, and relaxed, you have them in the right frame of mind to listen and carry out your commands because they want to please you.

Bullmastiffs are intelligent dogs, and at various stages of their young lives, they will have their stubborn episodes. You must go back to the beginning of your training to reinforce what the dog already knows but is just showing minor insubordination and testing your resolve.

This stubborn phase is not a good time to get upset or impatient with your Bullmastiff puppy; recognize this little backward step for what it is and get going with basic training again.

Training has to include socialization if you’re not going to enroll in classes. Try and ensure your puppy meets as many new people and animals as possible daily. Introduce them to sights and sounds that they must become accustomed to, such as traffic, everyday sounds around the home. Let them meet and play with children, different people, and other animals when they’re puppies.

Is A Bullmastiff A Good Guard Dog?

Guarding is a Bullmastiff thing; it’s what they were initially bred to do. When you bring home a Bullmastiff puppy, over-enthusiastic guarding is an instinct you must be careful to curtail, which is where socializing comes help.

When you add in the Bullmastiff’s giant size and intimidating appearance, you have an excellent guard dog. Bullmastiffs will not hesitate to attack and defend against threats to their family.

You need to be aware of family play situations; it can be difficult for a Bullmastiff to recognize children are only playing and not hurting one another; it’s best to avoid play-fighting around your Bullmastiff.

Yes, Bullmastiffs drool. You’ll need to keep a cloth or towel close by to wipe any hanging drool before your Bullmastiff shakes their massive head and drool flies to all four corners of your room. 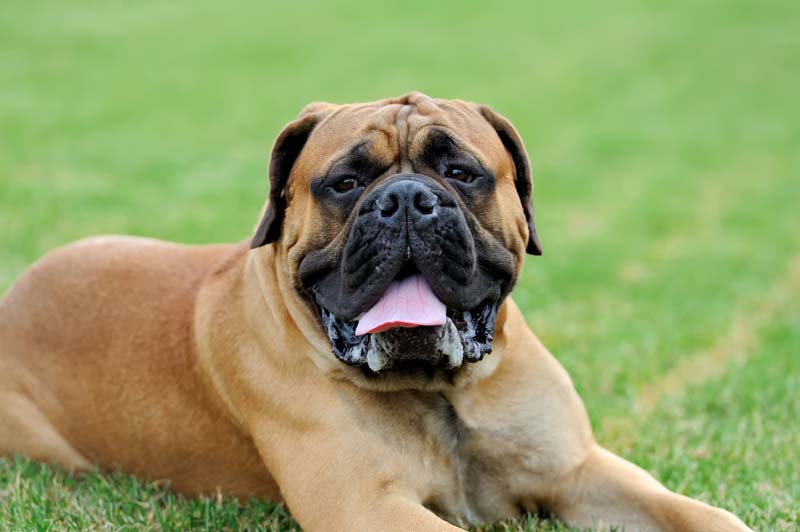 You know certain times when drool will appear, such as when they smell food, if they’re hot, after exercise, drinking, and eating.

Do Bullmastiffs Need A Lot Of Exercise?

Depending on the dog’s age, exercise needs will vary. When Bullmastiffs are young, they have more energy to burn, so they are more active. However, you have to be careful not to allow them to over-exert themselves. Giant dogs like Bullmastiffs are heavy, and this weight on young bones and joints can cause irreparable damage later in their lives.

Bullmastiffs need to go out a few times each day for short walks. They need to be active in an outside environment. But you shouldn’t stress them with long walks, and that’s doubly important on hot days. 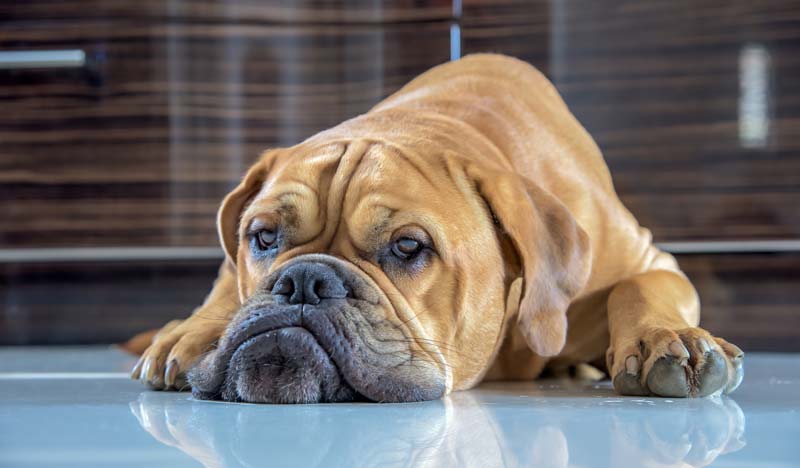 As a breed, they tend towards obesity, so you have to keep that in check; a few short walks each day will get the blood pumping and keep their lungs and heart strong. Because it’s dangerous to over-exercise, your Bullmastiff obesity should also be kept in check with the amount and quality of food and treats you feed them.

What Is The Life Expectancy Of A Bullmastiff?

Bullmastiffs live between eight and ten years of age. You might be wondering why it’s a relatively short lifespan when some smaller dogs live until their late teens.

Large dog breeds age at a much faster pace and compared to small dogs, their adult life does run at a quicker rate than small dogs. Bullmastiffs also grow at a more rapid pace than smaller dogs. Through a Bullmastiff’s puppy stage, they can gain as much as four pounds each week.

Should you be the right dog parent, a Bullmastiff will make the perfect pet. Bullmastiffs are not for everyone; if you’re an inexperienced or timid dog owner, I would advise against getting a Bullmastiff.

In addition, Bullmastiffs do so much better in a single pet household.

Bullmastiffs are intelligent, stubborn and will test the boundaries you lay down. They drool excessively, they have terrible flatulence, and because of their giant size, they can be clumsy. They don’t possess side or rearview mirrors and have no concept of their size. You will have plenty of accidents, with tables, ornaments getting knocked over and broken.

However, if you’re up for a giant dog and want a lovable, loyal and calm gentle giant, who will always protect you and yours, then don’t hesitate to get a Bullmastiff.