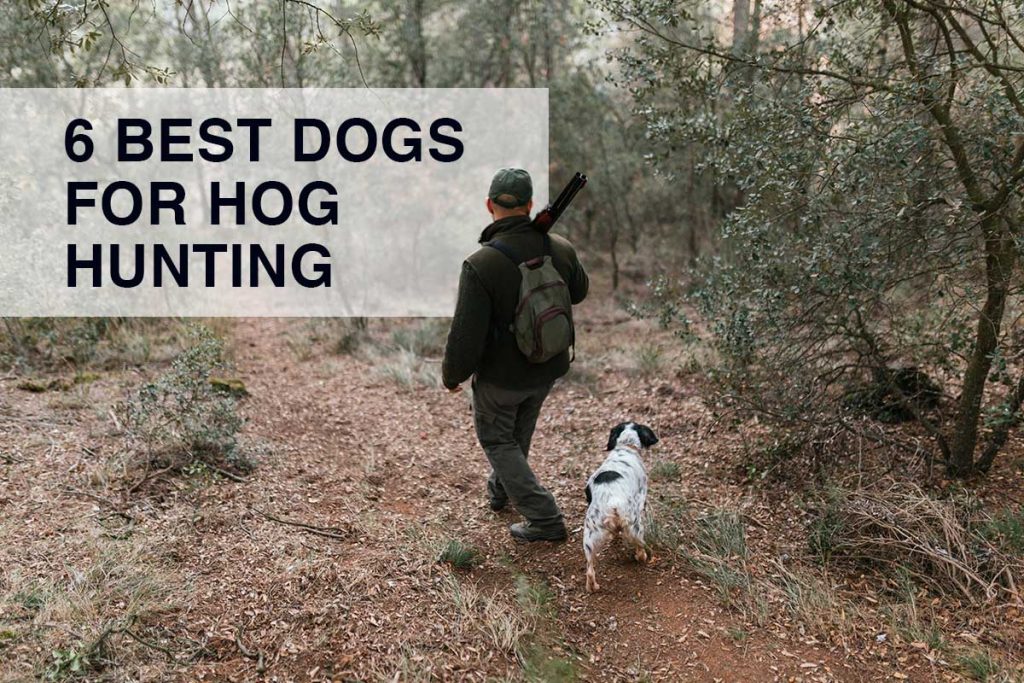 The sport of hog hunting is exhilarating, stunning, and hazardous all at once. You must have the proper gear because the journey is fraught with peril at every turn. The correct hunting dog is essential for any successful hog hunter’s arsenal. Tracking hogs is much easier when you have suitable dogs, and fully-trained dogs can hold the hog until you get there. There are dozens of different breeds to select from for hog hunting.

Which are the best dogs for hog hunting?

You can accomplish feral hog hunting with several different kinds of dogs; because of that, we haven’t placed the dogs we recommend in any particular order; it’s a question of you choosing the best dog for yourself. 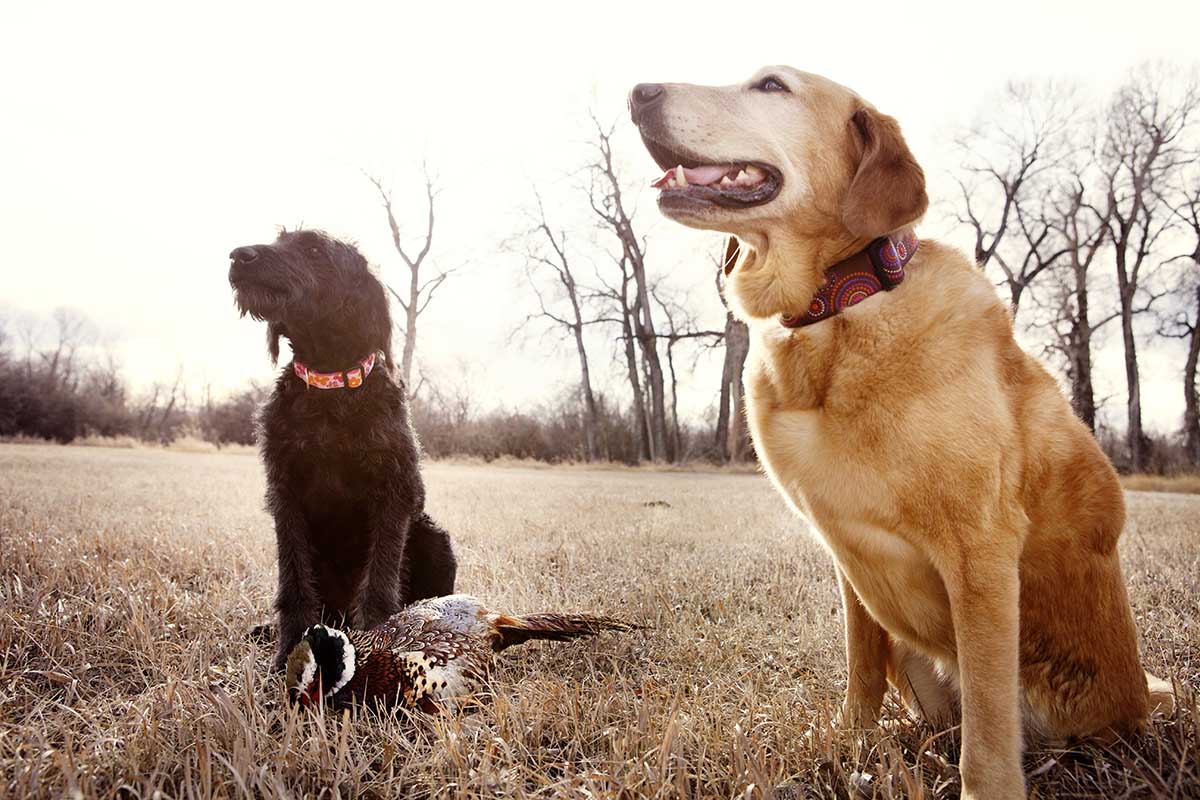 Read more to learn about the best hunting dogs and how to choose one for your particular needs.  After reading this article, you’ll have a much clearer picture of which hunting dog will be best for your situation.

What Characteristics Do You Need In A Hunting Dog?

Choosing a hunting dog for wild boars requires developing a checklist of desirable characteristics. Everyone has different needs and thoughts about their choice of dog, but I believe a top hog hunting dog should have these qualities, at the very least:

Bay dogs chase and bay the hogs letting the hunter know they have a hog. The dog chases the hog, cornering it until the hunter can arrive and take control of the hog. It’s not the bay dog’s responsibility to fight the hog.

The catch dogs hold down the hog. The catch dog is typically protected from the hog’s sharp tusks by wearing chest armor during hog hunting.

Hunters pretty often use bay and catch dogs in tandem.

Although many hunters have found success with only one type of dog, either a bay or capture dog, all breeds can carry out both duties to help the hunters.

The original purpose of the Rhodesian Ridgeback was to hunt baboons, hyenas, leopards, and lions. Hunting lions brought this breed’s true bay dog potential to light by hunting lions.

The dogs would discreetly follow the lion, baying only when the animal was cornered and alerting the hunters to their location. The Ridgeback’s agility and intelligence would position the lion in the exact position for the hunter to dispatch it. Hunters in North America use a similar strategy when they are hog hunting. 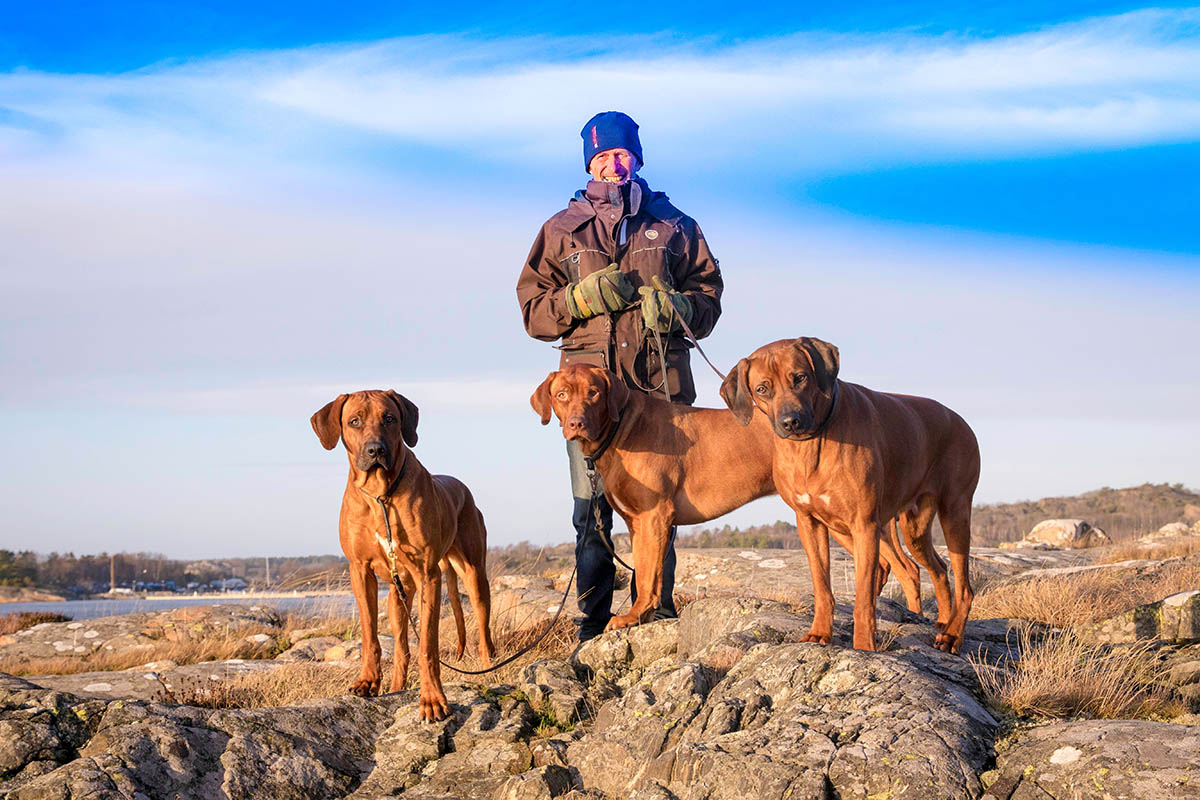 A pack of Rhodesian Ridgebacks can pick up on the scent of a hog from a vast distance and stealthily approach it, alerting the hunter with loud bays. The Ridgebacks can corner and hold the wild hog for as long as necessary to allow the hunter to join them and kill the hog.

Rhodesian Ridgebacks can also be used as catch dogs with proper training. Given their size and power, as well as their lion hunting heritage, the Ridgebacks are more than capable of pinning down and subduing the hog.

Despite their massive size, they possess tremendous stamina and can hunt at high speed for an entire day without tiring.

Rhodesian Ridgebacks are excellent game hunters because of their keen sense of smell. Upland and waterfowl hunters may be surprised by their abilities to flush and retrieve birds.

You need to start training Ridgebacks from a puppy with patience and perseverance, and you need to continue until they are adults. They try to get control if you allow them, which is difficult for novice owners to handle. Even though they are big dogs and like to be in control, they don’t take kindly to harsh treatment.

Rhodesian Ridgebacks are perfect for families with children since they are highly protective and loyal to their owners.

Blue Lacys are one of the best-known dog breeds in the hog hunting world and were specifically bred for this purpose in Texas back in the 1850s. As a result of the Lacy’s breeding, the dogs have the right mindset and talents pre-programmed into their DNA.

Lacys are renowned for their incredible speed, agility, and strength. The dog’s talents lay more towards a tracking dog than a catching.

If the dog has a flaw, they tend to get a little too hot on the nose. It’s not that Lacys are incapable of following hog trails, but they won’t be able to pick up older trails as well as a hound can.

It’s still thrilling to watch the bravery and perseverance of these dogs when they successfully corner a hog; they will keep even the most elusive hogs contained until the hunters arrive.

Training a Lacy moves at a rapid pace because of the dog’s overall intelligence; in fact, you’ll find them quicker to train than most other hunting breeds.

Black Mouth Curs are one of the most adaptable hog hunting dog breeds. These dogs make a formidable opponent for even the most challenging and aggressive hogs because of their well-muscled frame.

These dogs can also track older trails because of their powerful noses. As a result, we may safely assume that a group of Black Mouth Curs will chase down and catch hogs on their own.

The combination of the black, square-shaped muzzle and brown coat makes for a hugely attractive looking dog.

Black Mouth Curs make devoted companions for the family when they’re at home. Then again, they’ll show severe signs of behavioural issues if they don’t get enough physical and mental activity. For example, if you don’t take them hunting, you can use them for herding and protection or put the dogs through their paces in canine agility sports.

Never leave a Black Mouth cur unsupervised with young children because they are high energy and enjoy rough play.

In the 19th century, Redbones were developed to hunt raccoons, and because of their cold noses, they track exceptionally well. It’s no surprise, then, that they’ve become so popular for hunting larger game.

Redbone baying is exceptional; they sound a unique bay to tell you when they’ve successfully cornered a hog. It would be best to teach your Redbone to obey your commands very early. Or they’ll follow their nose and ignore you. They are known as “cold-nose hounds” because they can detect both fresh and old trails, making them highly flexible in the field.

Redbones are highly adaptable and intelligent trackers who are at ease in various challenging environments.

These dogs, when properly trained, are tenacious dogs who will not give up on a quarry, even if it means tracking across hills or even water. Redbones are also amiable by nature, making them suitable as both a family pet and a hunting companion.

Redbones are among the best hog-hunting dogs because of their exceptional sense of smell and tracking ability.

It’s also worth noting that their mental development is delayed; even though they grow to full size within a year, their minds won’t mature for another year and a half.

Dogos are many people’s favorite catch dogs since they are larger and more powerful than Pit Bulls. Initially, they were bred in Argentina to hunt wild hogs living in the country’s forests, as their name suggests. 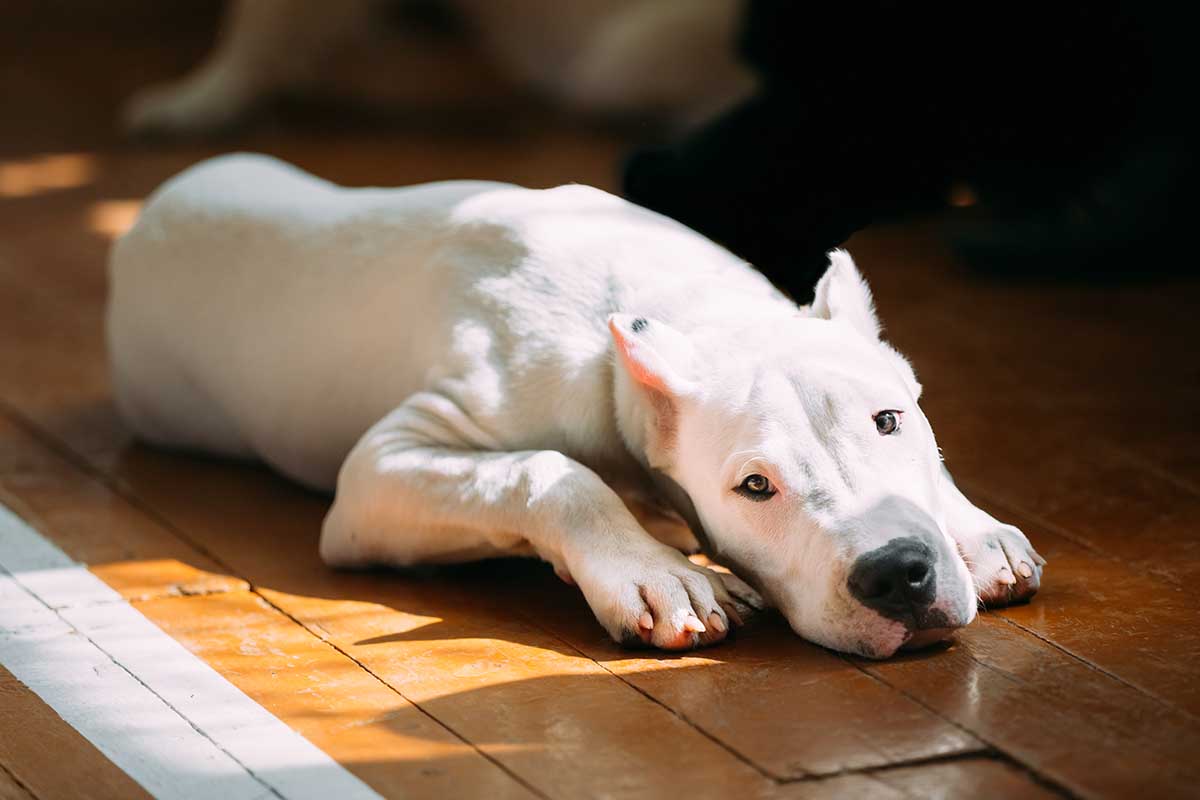 Individually, they are capable of taking down nearly any hog. Because hunters see the Dogo as having a weak nose, it’s far better to team a Dogo with any tracking dog.

The Dogo’s bite resembles that of the Pit Pulls pretty closely. They have a habit of piercing their teeth into their prey, making it impossible for them to defend themselves.

Dogos, unlike Pit Bulls, were bred for hunting rather than fighting; because of this, owners tend to see them as friendly and faithful family companions.

However, you’d have to meet their training and exercise needs to retain their impressive musculature. Dogos will also need an experienced trainer and plenty of early socialization.

Unless you brought them up eared with other family pets, the Dogo’s strong prey-drive makes the dog a wrong choice to have around other smaller pets.

Pitbulls were initially developed in the UK a couple of hundred years ago for the sport of bull and bear-baiting; they are also known as an American Pit Bull Terrier, or APBT.

Pit Bulls used to look very different from today, and breeders used the Old English Bulldog and Terriers as their choice of breeding dogs for dog fighting competitions once bull and bear-baiting had been outlawed.

Immigrants into America brought their Pitbulls to work on the farms and trained as hunting and protection dogs.

Since those days, Pit Bulls have developed specialized hunting skills for wild hogs.

The APBT has a lot of courage; they never back down from hogs several times their size. Even though the dog is not as big or muscular as other catch dogs, it is powerful and has the stamina to take on hogs all day.

Both hunting drive and sense of smell are excellent in Pitbulls. APBTs make wonderful tracking dogs, and some owners even train them specifically for bird hunting.

Contrary to stories spread in the media, The APBT is not an aggressive dog towards humans; in fact, one of the prerequisites of the old fighting dogs was their love for humans. If you’re thinking about a Pitbull as a guard dog, it’s not a good idea because they are too friendly, even to strangers.

The Catahoula Leopard Dog, Louisiana’s state dog, is generally thought of as a herding dog, but many people still use them for hog hunting.

Wild boar and other huge game animals, such as deer and bears, are no match for these powerful dogs. Treeing coons is another common way owners use these dogs.

Catahoulas have a distinctive hunting style because of their herding instincts. As with any other baying breed used for hog hunting, the first phase of the hunt is relatively similar. Wild boars can’t escape the pack once the dogs have picked up the trail, baying and cornering the hog until the hunters arrive.

The critical distinction is in how they approach the animal. In a way, it’s similar to the way they herd other animals. Catahoula Leopard Dogs surround the hog, forming a circle so the hunter can enter and kill the hog.

Plenty of exercise and activities are essential for the Catahoula Leopard Dog because they are primarily working dogs. These dogs soon become bored if they are not hunting for wild boar or other big game or on a ranch herding farm animals. Boredom quickly sets in, and you’ll have a lot of behavioral issues.

Catahoulas are rapid learners who are self-sufficient after only a few years of training. When the time comes, they’ll know what to do and how to use what you’ve taught them. 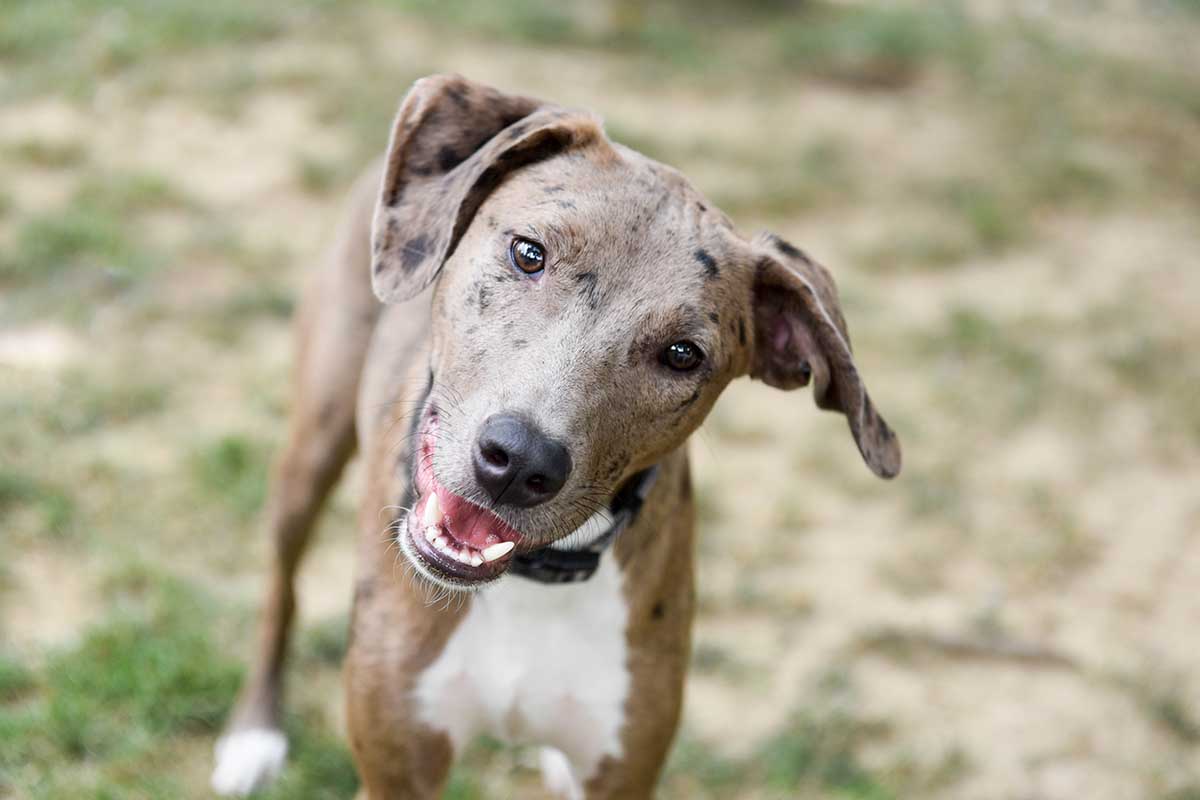 Besides being a lot of fun, taking down hogs will help your local area reduce the damage hogs cause to surrounding farms.

A Redbones can follow hog scents, and a Dogo Argentino would bravely take on the wild boar. However, that’s just an example because whatever breeds you decide on, be careful to provide your dog with the proper training and protection it needs to avoid being attacked and injured by a hog. Be patient with the dog you choose because some breeds take a while to mature and require additional socialization, especially if you want the dog as a family companion.

Should I put my dog down if he has pancreatitis?